A Tale from the White Liar Tavern 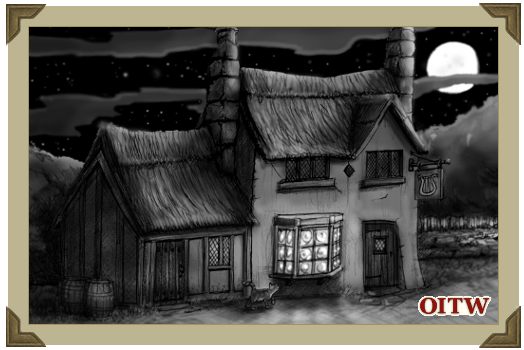 Artwork Conceived and Created by Tony Harwood and Edward Jackson

Throughout the realms of Valon the White Liar Tavern in Broomcoat has a very special reputation for the quality of the ales sold and the tales told. During the cold winter months the landlord brings comfort to his regulars by offering hot mulled brews and spiced pies. With steam rising from their flagons it is customary for patrons to recount their stories...

...As one balmy warm evening passed the clientele became restless, requests for a new story fell on deaf ears. The landlord, who had begun to worry that his regulars were going to leave and find comfort elsewhere, barged into the kitchen and demanded that the chef, one Festering Martin go and entertain the paying customers.

The grubby looking Goblin dried his hands on his apron and turned to face the landlord. “I’m afraid I know of no fine story; no tale of daring-do to save your bacon.”

The landlord sighed, but suddenly remembered the green skinned fellow’s liking for a wee dram as he cooked. “I’ll tell you what Martin, if you can regale them all with a tale I’ll double your cooking sherry for next month.”

The Goblin paused, stirred the pot of stew he was working on with one hand and drank the snifter of sherry he was holding in the other and nodded. “I can’t promise much but I do have a story from when I was much much younger.”

“That will have to do.” And with that Martin was unceremoniously pushed into the main bar by the landlord who announced to all that were gathered there, “Here is a tale for your entertainment.” Cheers went up and the landlord started refilling peoples tankards.

Martin, unaccustomed to public speaking began badly, stuttering odd words in a low tongue even occasionally lapsing into his native Al-Garveyian. Before long, cat-calling and jeering started getting louder and louder. Urged on by the landlords promise of more cooking sherry Martin raised his voice and with surprising authority he began his tale.

“What most of you probably don’t know is that I worked in the camp of Olde Nosey himself, during the marches across Al-Garvey, Southern Catalucia and even across into Armorica. During this time I started out as chief bottle washer for a tyrant called Leighty, Big Fat Leighty, Orc leader of the 1st Catering Corps of the Army of Albion. Leighty was a bully back then, a cruel leader who, even on his better days, would beat the younger staff, steal their copper coins all the while tearing at some fine joint of meat at the expense of your Kyng.

“I had promised myself that I would be free of this beast and hatched a plan, a cunning one, or so I thought.

“Each day I smuggled a portion of salt back to my leaky excuse of a tent and squirreled it away. Sometimes just a few grains, while other days enough to fill an egg cup. Salt was a very limited commodity in these troubled times and stealing any amount - no matter how small - was not usually worth the risk of being found-out. It wasn’t the cleanest of stuff to be honest, out there on campaign. So each night I delicately sorted each grain of salt from other seasonings or spices to keep my crystal salt pure.”

As Martin’s story had progressed, the revellers at the White Liar had actually quietened down to listen to the details of this unusual and new story. Soon, as often happened in the White Liar all in the tavern became enthralled with this strange tale.
Festering Martin, continued.

“After months of hoarding I had enough precious salt to fill an entire Shako and, packing the precious seasoning away in muslin bag, I hid it away in my hat. I decided to trek into the local village and sell the salt at market – you may not know but during the wars with that damned usurper Mordred most people throughout Urop had limited amounts of salt, that which they did have was often taken from them for Army use. The poor peasants were willing to barter with livestock, silver and yes – even gold.

“As I left camp, my imagination blossomed and thoughts of how I would spend my soon to be acquired gold were uppermost in my mind. I would buy myself a goat, no – two. A nanny and a billy. Milk and cheese would be my reward and then when the time was right I could breed from them, building up a small herd to feed and keep me in a manner more befitting a proud Goblin. The herd would grow and I would be able to sell meat, milk and cheese, trading with all - Goblins, Dark Elves and Orcs to line my pocket.

“The dream developed quickly as I neared town. Within a short time I realised I would be able to purchase a small holding, a farm perhaps, maybe two and as the herd grew, I could branch out and rear cows, pigs, hens maybe even a horse for me to ride – a fine stallion, to ride into market and collect my profits. I could afford to employ others to do my work and become a Gentle Orc of leisure, with a fine town house and a splendid carriage. My cellar would be full of fine wines and spirits which I alone would enjoy.

“A wife would soon follow – a Catalucian beauty with swarthy skin and jet black hair. The best clothes and a new felt bicorne with leather straps and a red rosette would come soon after. It was a fine day and I was nearly at the market, the village just within view. I felt so proud knowing that soon all this would be mine. As I crossed an ancient stone bridge I peered down into the clear water and I saw my reflection. The dream of riches running through my mind, I pictured myself in fine clothes and even a new hat to replace my battered Shako and I bent further to admire my full reflection, thinking how fine I would look in this new attire.

“Alas, as some of you may have already guessed, my Stovepipe Shako, top heavy with my ill-gotten salt tumbled from my head and even as I tried to grasp at it, it fell into the flowing water, the entire bag being washed away in seconds.

“I sat for a long time on the bank of the river thinking of my folly that day, I even cried for my loss – more salt from my tears in that Al-Garvey river. However as I sat there I realised the whole scheme would not pay off. The only way to make it in this world was to work for it, to make my fortune by hard graft and not silly schemes. With this new resolution I retrieved my shako, dusted myself down and marched back to the camp. The next time Leighty tried to shake me down for my gold I bloody well gave him my best.

Festering Martin paused and looked down at the scar on his arm, and despite the old twinge of pain where the cleaver had dug deep, smiled a little and continued, “Despite that not working out too well at the time, within weeks I had been promoted to Leighty’s second in command.”

“Soon after that we went on what became known as the Great Rabbit Hunt and established ourselves as an important part of Olde Nosey’s war machine.”

The crowd cheered and clapped, many came forward and patted Martin on the back.

“So how did you end up working here?” came a call from the back, someone from Taffsea judging by the accent.

“That is a story for another time,” replied Martin a little sheepishly, “but it too began with tears of salt and ended with the greatest adventure I ever experienced.”

With that Martin collected some of the empty tankards and bowls and headed back into his kitchen. As the door swung shut behind him he looked at the cleaver mounted on the wall and raised his eyes skywards, “Thanks Leighty, thanks for everything.” Smiling, he carried on cooking in his kitchen, his favourite place in the whole world.

As the introduction suggests this is not the only tale that has been told to the patrons of the White Liar in Broomcoat. We would like you to send in your stories of other people who have stopped by to share a tankard of good beer and a spin a tale to enthrall. Please send your submissions in to This email address is being protected from spambots. You need JavaScript enabled to view it. and tell your tale of Valon. You can find more details over on The Notables Yahoo Group.