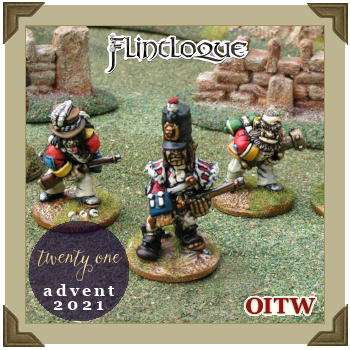 Miniatures painted, based and photographed by Tony Harwood.

A Foul Moth Freddy story from the later period and after The Great Mordred Wars had ended.

As the wars across Urop were drawing to a close and plans for the withdraw of troops were being planned Wheeling-Turn started to think about how he was going to reward the Elves and Goblins of the Al Garvey Peninsular for their support during the Great Mordred Wars, the phrase ‘Hearts and Minds’ was often heard and spoken of although few knew what was meant by the condescending words.

Freddy and his Posse were also beginning to look forward to a return to the familiar back streets of Londinium, but higher powers on Orcsguards had other ideas.....

This short tale tells of how Freddy, (actually it was Tricky-Dickies idea) made the most of the roll-down of troops from Al Garvey and in the process lined their pockets for a life of luxury back in Olde Blighty.

It all started with a simple and generous donation from the Seamstresses and Drama groups in Great Britorc. A group of well wishers decided that sending pencils and paper to the innocent little Goblins would help with the rebuilding of Goblin society and raised many hundreds of pounds to send books, paper and pencils to village schools and libraries throughout Al Garvey. A beautiful and benevolent gift that was later referred to as ‘Goblins in Need’; they even devised a cuddly mascot called ‘Snottly,’ a large green Goblin with a damaged eye and huge bandage.

The first loads of aid were destined to be distributed by the last remaining regiments of Red Coats and guess what? Freddy and his group were given the responsibility of making these deliveries. Much to their chagrin.

OK – the first few deliveries although despised by the Orcs were actually much appreciated by the Goblins and although food would have been more welcome (and was sorely needed), they at least enjoyed using the paper. It was so much smoother and softer than the rough newsprint that they had been using to clean their arse with. The pencils were also used as cleaning material – you could get right into the ear and up the nose to remove wax or snot!

Trickie Dickie realised quite quickly that pencils and paper could be worth something on the black market and so began Freddy’s last caper – The Great Pencil Fraud where stationary was redirected to more grateful recipients and a few pennies changed hands.

For months, the regular supplies of paper and pencils from Blighty made their way via Freddy and the Posse to various underworld concerns, being used for such purposes as betting slips, IOU’s and forged bank notes, while the pencils had numerous uses, one of the more bizarre was as decoration in the hair of She-Goblins, with coloured pencils afforded a premium amongst the more stylish aficionado’s and hairdressers.

Obviously this good fortune just couldn’t last and eventually the authorities got to her of this abuse of power. However by then Freddy, Tricky and others of the now famous Posse were on their way back home and after a brief sea voyage were soon to be seen spending their ill-gotten gains in the most salubrious venues across the great city of Londinium where even Orcsguards couldn’t touch them.

Although there are many other stories I could retell about our Freddy, this is one that I have wanted to record for some time and as with many of the adventures featuring our foul mouthed antihero, this one is also based on an old family tale, which I remember being told when I was a very young boy - where some un-named ex-soldier who was based in occupied Germany after the Second World War would redirect paper, pencils and stationary supplies ear-marked for relief to ‘other’ recipients and exchange the war supplies for credits. Those who have followed the adventures of Freddy will know that he wouldn’t have any qualms about doing the same.

This article was written exclusively for Orcs in the Webbe and was first published on the 24th December as the twenty-first entry in the 2021 Advent Calendar, 2021.

You can read all the previous adventures of Foul Mouth Freddy by clicking on his maroon  tag  just below and to the left.