"Foul Mouth Freddy and the Worm of Villa Rocca" 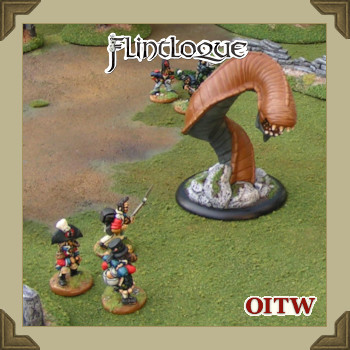 All Hallow’s Eve just wouldn’t be the same without a Foul Mouth Freddy short story and in keeping with tradition, here is a tale to make your skin crawl... 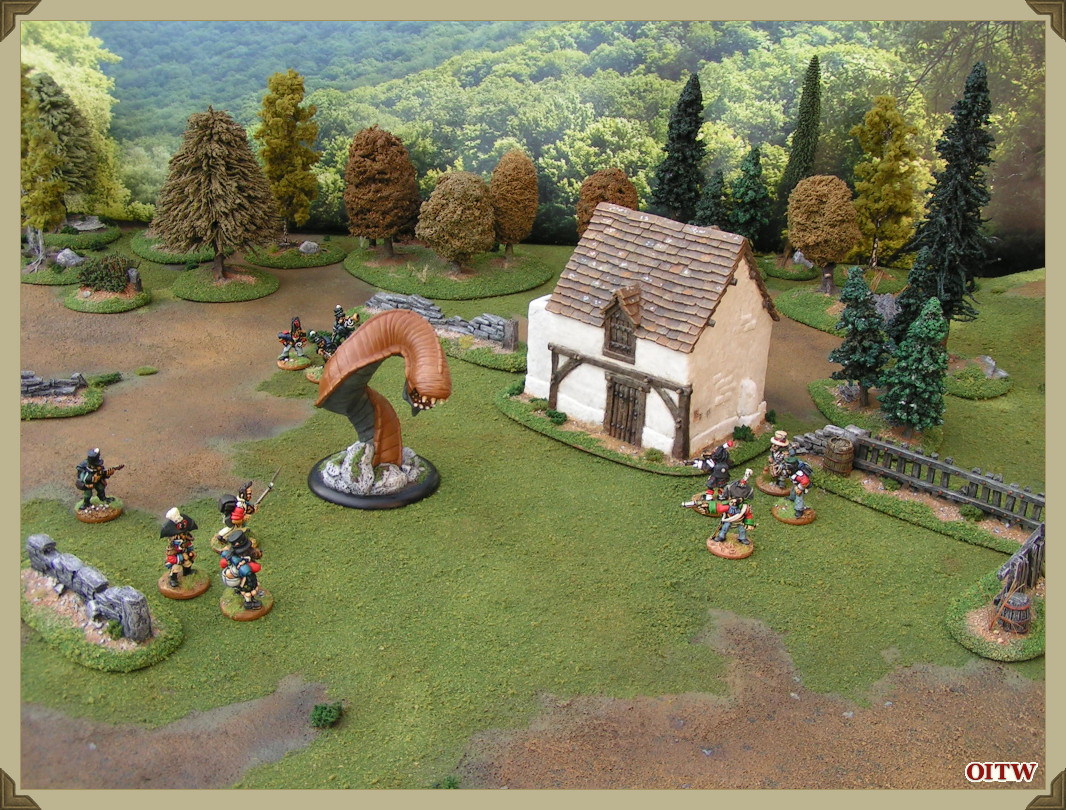 In one of those rare moments when the war in Urop seems miles away and the only worry you have is whether you’ve packed the right fishing lure, Freddy and Big Fat Lieghty were enjoying an afternoon fishing along the bank of some meandering river. The fact that they were not catching anything was not a problem, as any true fisherman will tell you the art of fishing has nothing to do with catching fish.

As dragonflies and small insects darted across the still water Freddy dozed in the warm summer sun and dreamt of non military matters and liaisons he had once enjoyed.

He was abruptly pulled from his slumber when the rod that he was holding in his hand jolted into life. He had a bite.

‘Bugger,‘ said Freddy as he scrambled to get a grip on the improvised fishing rod.

What followed was a battle of wills greater than many fights Freddy had been involved in and when he finally beached the huge dark creature he was both exhausted and mystified as to what exactly he had caught.

Lieghty in his usual skittish manner wasn’t going anywhere near this breathless monster, a fish. No an eel. No a snake as black as midnight with eyes that glowed with a pale greenish tint and enough hatred to terrify the most stalwart of soldiers. When Freddy had got his breath back, he too looked in wonder at the dreadful creature that lay before him.

It moved and writhed with tormented agony and was soon entangled in yards and yards of coarse fishing line, it wriggled across the grass leaving foul stinking residue across the ground and the screeching was far from natural. When it refused to die Freddy swore (well no surprises there) and picked up a stick with which to strike the worm dead. After many attempts and three pieces of broken sticks later, Lieghty stretched for his trusty Bakur then with all his might struck the creature across the head.

It was dead now. Or was it?

Freddy and Lieghty thought about leaving it there, but who would believe such a fisherman’s tale if they didn’t take it back with them to camp?

They wrapped the worm in an old coat and then lifted it into the open cart. After hitching up the single horse they started to make their way back.

It wasn’t long before they heard the flapping in the back of the cart and to their horror the coat and worm were writhing and making the same screeching sounds that they had seen and heard earlier on the river bank. Against all the odds the creature was still alive.

‘F**k this’, said Freddy and pointed the business end of his Bakur rifle at where he thought the creatures head was.

The worm was at last silent...

Freddy and Lieghty continued their journey back to camp in silence, neither wanting to mention the days fishing or wanting to look back at the remains that now decorated the rear of the cart.

About three miles outside of camp they passed through the small hamlet of Villa Rocca and pausing for a breather and to take in the tranquil diversion of this beautiful sight. They eventually did look around at the blood splattered remains and ruined coat.

No it couldn’t be.

The coat moved and the worm once again started to writhe.

I’d like to tell you the comments that came from Freddy (and Lieghty) but good manners and the worry of less worldly GentleOrcs reading these words, forces me to say that the air went from blue to purple and then to black.

Freddy and Lieghty looked at one another and without questioning or comment, poured the contents of the coat into the town well. The creature was a tight fit in the stone well, but slithered down the hole and was heard to plop into the water below. Freddy and Lieghty hightailed it back to camp and an evening of demon drink and fitful sleep followed.
This is where the story might have ended, but no...

Sometime later as Wheeling-Turn and the Grand Army of Albion advanced across Amorica they once again has the opportunity to visit the once beautiful hamlet of Villa Rocca, but this time it was a deserted and very run down village with burnt buildings and ravaged field. A village that was very different to the one that Freddy remembered all that time ago.

‘They’ve ransacked and ravaged the land, making it unfit for Orc or Goblin.’

As they approached the town square a screeching and roar was heard by everyone. It seemed to be coming from the ruined well and even the bravest of the brave had a slight trickle of sweat appear on their foreheads at the horrific sounds. Sounds that both Freddy and Lieghty knew at once to be the very same worm that they had caught all that time ago. The Worm of Villa Rocca.

It took nearly three days of fierce fighting by over two hundred seasoned troops to eventually eradicate the worm and only then after scores of wounded and dead redcoats lay in piles. It is said that a newspaper Orc wrote a report for the local penny dreadful back in Londinium, even including a sketch of the dead beast, but it was never published – his editor thought it a joke. A joke in very bad taste.

Wheeling-Turn rued the day that he fought and killed The Worm of Villa Rocca.

While Freddy and Lieghty thought it best not to say anything.

As with most of my Foul Mouth Freddy stories this one is also loosely based in fact. Let’s just say that Dad was often asked why he carried a golf club with him when he went fishing. It wasn’t because of a worm, but a gigantic pike that just refused to die and was eventually discarded in a local boating lake while driving home. The same boating lake that later complained that all of the fish being eaten!

This article was written exclusively for Orcs in the Webbe and was first published on All Hallow's Eve, the 31st October, 2021.

You can read all the previous All Hallow's Eve articles by clicking on his maroon  tag  just below and to the left.