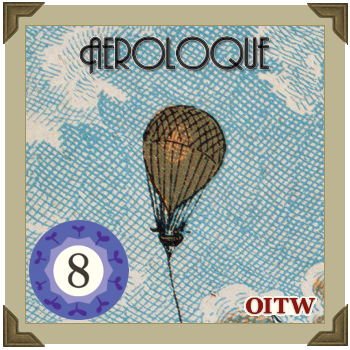 Back in 1996 when Flintloque was at its pomp and development prospects looked rosy, ideas for new games and avenues to be explored were many. Unfortunately in the brave new world that followed, most of these were susbsequently not given much consideration. However one that I've always had a soft spot for was the idea of aerial combat in the skies in Valon.

I remember one evening walking through the streets of Essen with Mac Coxhead, Steve Morris and Heather Palling as we batted nonsensical ideas about this potential game (and some very silly puns) between us. We even came up with a working title - Yo Focquer! The game was probably only going to be a small book, utilising 1/48th Eastern European First World War model kits that could be obtained cheaply at the time, with white metal fantasy accountrements and Valonian pilots being produced by AA.

The idea has essentially remained dormant since (although Strange Tydes aka Hearts of Oaque does contain war-balloon rules), until I chanced upon some fantasy flying models in Irregular Miniatures 1/300th fantasy range - with Wessex Games having released their Victorian Science Fiction flyer combat rules Aeronef, I decided that the concept of Yo Focquer! could be dusted off, albeit in a much smaller (but probably more gameable) scale.

All rules are as per the standard Aeronef rulebook unless otherwise amended here.

By and large I've used the models that Irregular supply, although I have used some old GW Man O'War balloons as well. Given the size and ramshackle nature of the craft involved in Aeroloque I can't see it being beyond most gamers ability to create some simple conversions out of Irregular 's 6mm WWI aircraft, various naval ranges and odds out of the scrap box, should they wish to create their own flyers.

This model is the human flyer in the Irregular range, but is modelled on Da Lava's C18th design and looks perfect for the High Elves. This model (and stats) can also be used to represent to Goblin Flying Boat.

Here I used some old Man O'War models, but they are pretty easy to scratchbuild. Both Finklestein and Krautia use balloons.

This is again taken from the Irregular range and also finds its place in both Dwarf air forces.

I've included this more for completeness sake than any other reason. A suitable model converted or the old Dwarf Man O'War ballooons used.

Special Rule: Orc Focquers can only fire through their forward arc.

This model is also taken from the Irregular range. For background purposes, I envisage this model to be armed with underslung congreve rockets, launched by the brave creworcs perched on the flyers wings!

The only compulsory new rule for the game is to take into account the ramshackle technology involved.

When a player rolls his Gun Dice for firing, hits are scored as normal with 6's. However if a 1 is rolled, then this indicates that the flyer has suffered some sort of technical problem. After firing has been resolved, the player must roll 1D6 and add +1 for any additional 1's rolled in that round of firing. The final score indicates the level of technical failure:

Many races have adopted anti-flyer ground batteries (such as the Orc Congreave Rockets and Dwarf Flyer Harpoons) in an attempt to combat enemy attacks. For these use the anti-aeronef battery rules out of Aeronef , but restrict them to a maximum 1 Gun Dice due to their lack of effectiveness.

Despite CCI's attempt to kill off Dragons and the other big creatures of Valon, it seems a shame not to include rules for large untamed flying beasties. The table which follows is for a generic flying beastie, but gamers are encouraged to come up with their own aerofauna to fit particular scenarios.

Big Flying Beasties are not controlled by a player but by a preset reaction table. The beastie is rolled for only once per turn on the reaction table. All flyers move half their movement as per the normal turn sequence, then the roll is made for the beastie, the result is then applied in full before any flyers then complete their movement.

A = Attack: Beastie moves 15 cm towards nearest flyer. If within 5 cm of a vessel before or during movement then attack the flyer with a strength of 10 d6 Gun Dice.

Ad = Advance: Beastie moves 10 cm towards nearest flyer. If within 5 cm of a flyer before or during movement then attack the flyer with a strength of 4 D6 Gun Dice.

C = Charge: Beastie moves 20 cm towards nearest flyer. If within 5 cm of a flyer before or during movement then attack the flyer with a strength of 6 D6 Gun Dice.

H = Hover: Beastie does nothing.

Magick in Valon seems to have disappeared of late, but this was never really the initial intention. We just wanted it to be totally wild and unpredicatble (see Ranke & Vyle for an idea of how this was going to happen). Personally I think that without magic, or something equally outlandish in fantasy games (such as black powder era flyers) you might as well stick to historical gaming.

Due to the simplified nature of Aeroloque , it is hard to introduce magick into the game at anything other than a simplified level. Should gamers wish to include wylde magick in the game then apply the following rules.

The Magickyman can attempt to cast a spell on an opponents vessel at anytime during a turn (the same as firing). Magick does not have to be resolved at the same time as firing (although both can occur in the same turn).

Magick can be cast up to a range of 30cm. Spells cannot be guaranteed, nor can their effects. Wylde Magick is very unpredicatbale and dangerous - You have been warned!

To cast a spell, the player rolls one D6. If he scores a 6, he rolls the D6 again and consults the following table for a successfully cast spell:

If he rolls a 1, then the Magickyman has fumbled the spell and must roll a D6 to see what the result of his error is:

Of course this game can be expanded further. Players may wish to adopt any of the optional and extra rules in the Aeronef Captain's Handbook or consider rules for boarding enemy vessels to capture them and turn them against their former masters.

If you do I'd like to hear from you - who knows, if Aeroloque is popular, Wessex Games might expand it into a fully fledged set of Black Powder Fantasy Aerial Warfare Rules!

~
A Quick Guide To Wessex Games'

(taken from the rulebook)

Aeronef is a simple set of wargames rules designed to allow you to play Victorian Science Fiction aerial wargames with 1/1200th scale miniatures. The rules are basic enough for beginners to try their hand, but flexible enough so that the more seasoned gamer will find them enjoyable. The flexibility of the rules also means that experienced gamers can introduce more advanced elements to their games such as different types of flyers and attacking ground targets, with ease. To this end we have included a
selection of rules expansions after the basic rules are described, and players are encouraged to develop their own.

These rules have been based in a hypothetical historical world where aviation became established some twenty-five years before it actually did. Whilst fictional, the background will seem familiar to most players and draws on many historical events and characters to this end. However should you wish to use a totally different setting whether it be based on a film or book background, some other game system or one of your own invention, feel free. The hobby of fantasy and science fiction wargaming is one that allows for individual gamers to do what they wish and we feel that players should make active use of their own imaginations and not be restricted by what the rulebook dictates. You do not have to rigidly stick to a particular background or exclusively use a particular manufacturers figures and vehicles for their game - even ours...

You can buy Aeronef right now over on Wargame Vault, if you don't own them, do yourself a favour and grab them now. 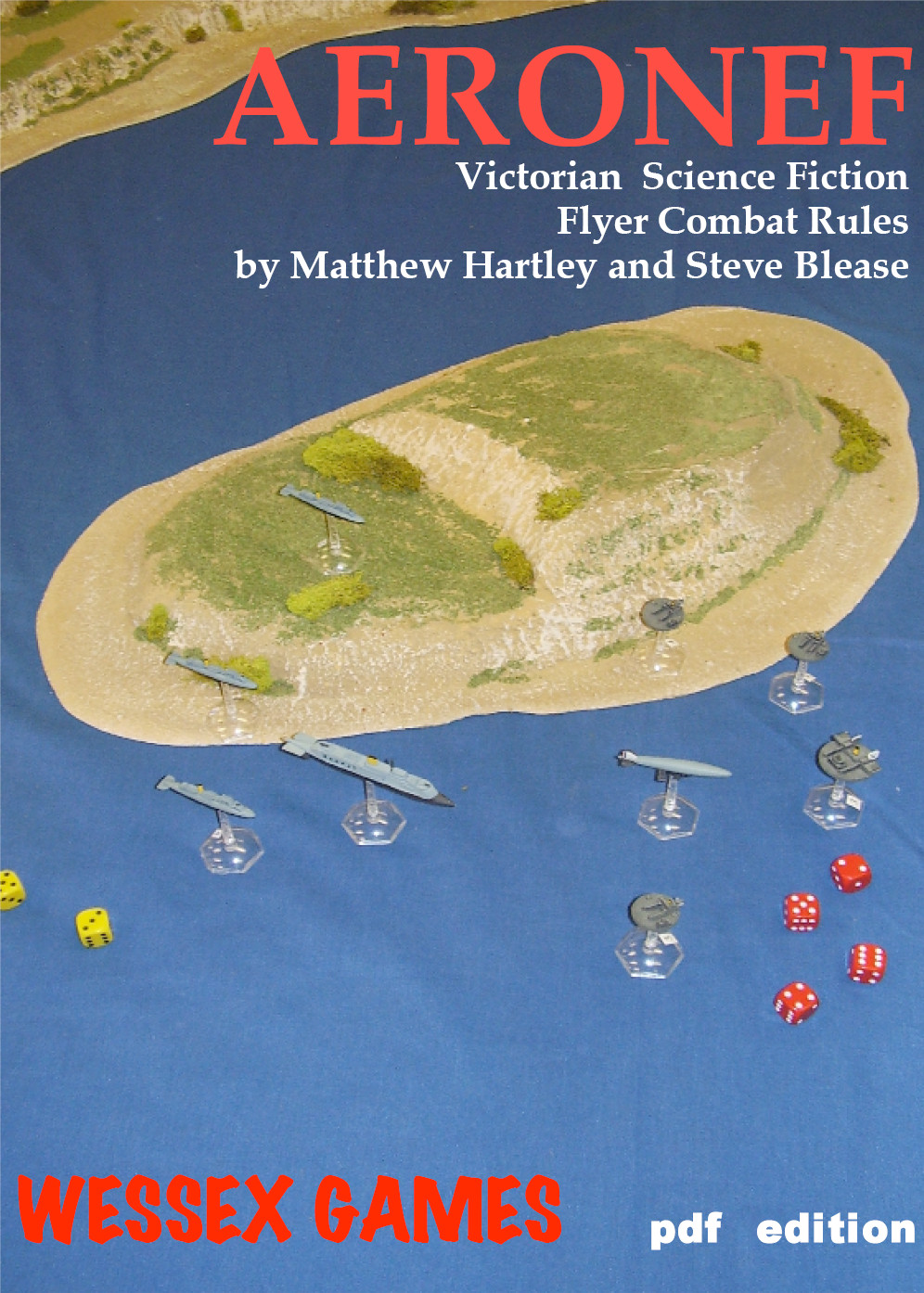 These rules were first published the excellent (sadly long gone) original iteration of Mike Baumann's Filbanto Stew website on the 7th June 1999. It was first published on Orcs in the Webbe v3 (powered by Dreamweaver) way back on the 23rd September 2005 and made the jump to v4 (powered by Google Sites) on the 14th November 2007. After that I think it dissapeared, it's hard to tell as v5 (powered by Joomla 1.x) was never fully archived thanks to the limitations of both myself and the early Joomla system I used. Worry not! The wrong has now been righted and it returned (to what I think is v6.5 (still powered by Joomla, now on 3.x) for those keeping track) on the 8th December 2020 as part of our 2020 Orcs in the Webbe Advent Calendar.

The Aeroloque logo was designed by me, Craig Andrews, a long time ago for that 2005 update - well before I was any good with GIMP - and is presented above in all it's unlayered, low-resolution glory.