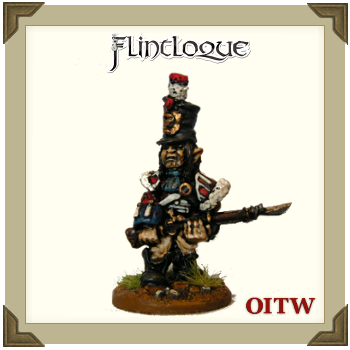 One of Tony Harwood's most famous creations returns. This year tasked with providing the food, drink and entertainment for a seasonal soirée. What could possibly go wrong...

It had become something of a tradition for Charlie to host a feast and bonfire at this time of year and he wasn’t going to let a small thing like the war against Mordred get in the way of tradition...

In a quiet, secluded wood the small farm house and stables looked for all the world like the perfect spot for a party, the large paddock area to the front of the buildings were peaceful and welcoming, while the sturdy structures would act as both shelter and storage areas for all the party food and booze. Charlie, ever the resourceful Bog Orc, soon had preparations for the big day – actually big night well under way.

In the past Charlie had supplied food drink and entertainment for the celebrations - his end of season feasts and firework displays were anticipated by all, young and old.

Freddy and his posse were well equipped for the tasks, but (well you know Freddy) his definition of fun, food and fizz are not to everyone’s liking. Food and booze were already stored at the farm – that was the easy part as they could be supplied (purloined) from the usual suspects (innocent and naive suspects like the camp cook and regimental quartermaster), the entertainment had been left to Dickie, that’s Trickie Dickie to you and me and unable to find any traditional firework Dickie had the bright idea to ask the most recent artillery corps – the KORB Rocketeers if they would help out.

So there you have it – the evening’s entertainment was all in hand...

Unfortunately, that very same, innocent looking farmhouse had for some time been the point where Mordreds blue-coated Ferach had met with the disgruntled guerrilla leader Don Hernandes Louis (or Don Locco as most of his followers called him) and supplied arms and ammunition in return for intelligence concerning the Orc redcoats and their allies. Tonight during the full moon there was to be another meeting.

I think dear reader that we all know Charlie’s party was going to be eventful for all the wrong reasons.

This simple gaming scenario sets the well soused Redcoats against a group of elite Ferach Voltiguers who along with their allies the Dark Elf guerrillas will come across the Orcs just after the booze has started flowing. Neither side were prepared for an all out battle, but I don’t see either side taking a step back.

What could possibly go wrong? 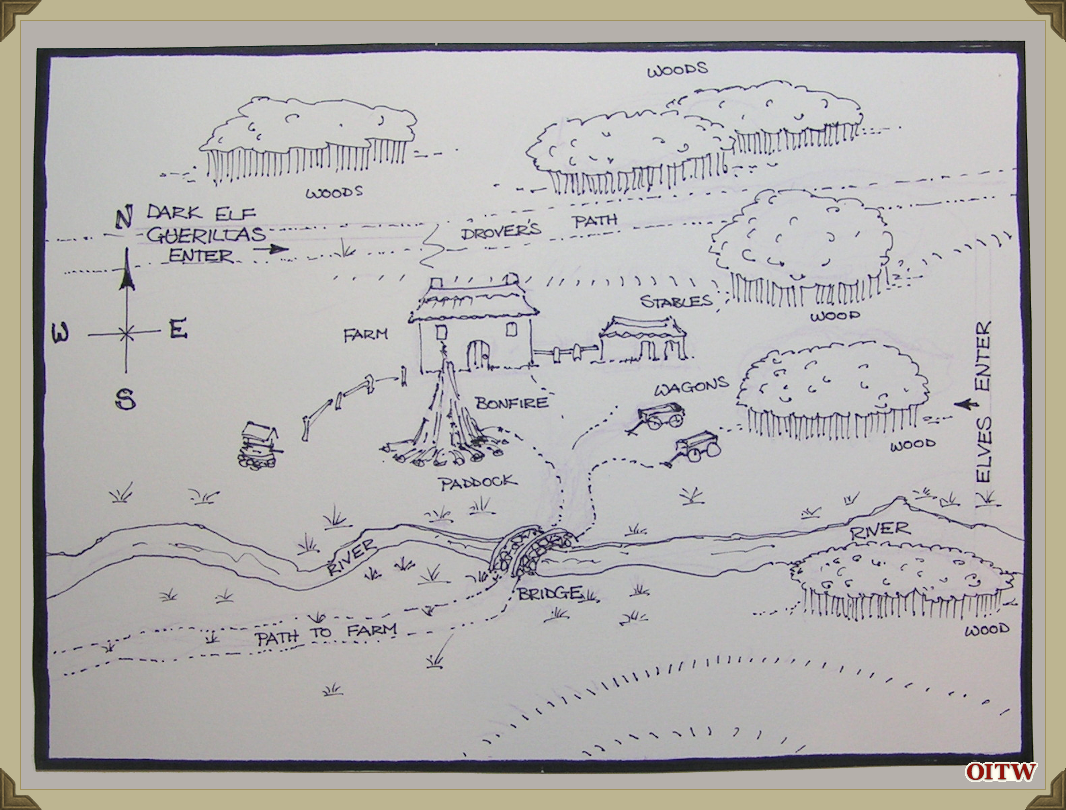 There is a huge bonfire in the centre of the paddock.

Innocent bystanders – there aren’t any. This is a Flintloque scenario, but add some non-combatants to the mix – they have come for the food and drink, mainly the drink. And if they can leave with more than they came with – well that’s a win in anyone’s book. The innocent bystanders should be loitering around the farmhouse, stable and paddock.

Freddy and the Posse

Already the worst for drinke, they came for the entertainment. What will they leave with? Freddy and the posse are gathered around the main booze wagon situated in the paddock – well where else would you expect them to be?

A mix of different regiments most the worst for wear and drinke. They should be armed with some flintloques, pistols and swords but also ‘make-do’ weapons like pitch forks and farming implements as no one expected a battle – a couple of brawls and the odd fist fight but not a full on battle. Try to keep a core of experienced soldiers reasonable sober or the whole evening could become a real blood bath. The Redcoats are gathered in small groups across the paddock, some are still arriving along the main road, about to cross the bridge (these have not had any drinke yet).

This group of ‘green’ Orcs have only just arrived from Blighty and are still being trained on their new-fangled weapons. They have not brought any explosives, but can make lots of noise and pretty patterns in the night sky. They can also set fire to lots of things – not always what they plan to set fire too, but this maybe worth exploring. Place them to the east of the paddock getting ready to start the firework display – they have wagons and wagons of rockets – but all are fitted with display heads and not explosive heads.

The small troop of Ferach were not expecting so much company, but they will still meet up with Don Locco and try to gain as much information as possible. If not well, shooting Orcs is so much fun. The Ferach arrive from the east through the wooded area and are all armed and fully cocked.

Initially it was a simple job of meeting up with the Ferach scum and trying to swindle as much treasure out of them without giving too much away. Now it’s an opportunity for some fun - long knives and fun. Don Locco and his group are entering from the north along the drover’s trail and behind the farmhouse.

Innocent bystanders: Get off the table with as much loot as possible, food, drinke or mementoes of the evening all count.

Freddy and the Posse: There are numerous small (and big) wins for Freddy and the group. Can they see the potential through drinke blurred eyes?

Orc Redcoats:  Survive the encounter with as few casualties as possible.

KORB Rocketeers: Firstly try to get the rockets to fly in the direction intended. This might be a good opportunity to show those in command that these rocket-thingies, could be worth investing in.

Ferach Voltiguers: Obviously kill or maim as many Orc Redcoats as possible, but this may also be a chance to get rid of that pain-in-the-arse Don Locco!

Dark Elf Guerrillas:  Loot, loot and as much loot as you can carry. Why waste an opportunity to benefit from this little fracas.

Obviously there is the opportunity for all to snaffle a few kegs of rot-gut ale or brandy. These should be scattered around the table in random stashes and it takes one character to carry one barrel at walking pace. The winner could be the group with the most barrels at the end of the encounter.

Charlie – ever the businessman has been charging Orcs and bystander to attend his feast. His loot chest will be hidden in the farm house and just full of welcoming coin. Who will be ruthless enough to realise that this is the true prize.

Don Locco is carrying a satchel full of information that he initially intended to sell to the Ferach. It would be worth much to those at Orcsguards. Possible even a medal (or two). But also have some worth to the Ferach.

The Ferach had brought some Emperors gold to barter with the Dark Elves, and I’m sure Freddy and the Posse could find a suitable use for it.

Setting fire to the bonfire will mean that all combatants are now dazzled by the light of the fire. Smoke may also be an issue.

Settling fire to the wagons full of rockets will cause quite a stir!

Guiding the rockets will need some thought – try 3 x D6 and convert into inches for distance and a random directional dice for the path the rocket will travel. Add random qualities as required to keep the game interesting!

Bonfire night at Charlie’s was a real treat, hotdogs, jacket potatoes and lots and lots of drink plus a huge bonfire and fireworks too boot. The farmhouse and stables were situated around a small paddock but most of the area was old woods and a stream. I seem to remember attending dozens of these annual events, but realistically there couldn’t have been more than three or four.

This year’s Foul Mouth Freddy Adventure is my usual mix of fun and mayhem based around one of these events – Have fun and remember Foul Mouth Freddy scenarios are all about the unexpected and the surprises, so don’t take it too seriously.

This article was written exclusively for Orcs in the Webbe and was first published on the 7th December 2020 as part of its 2020 Advent Calendar.

To see the complete adventures of Foul Mouth Freddy simply click on the   maroon tag   just below and to the left.