The original fontispiece from the 1995 1st Edition of Flintloque including the original credits and the Valonic version of the song Over the Hills and Far Away.

Something different for today's From The Archives article. As we all know Flintloque has gone from strength to strength over the years and is currently in it's 3rd edition with several books covering different theatres of war. When it launched back in 1995 it evolved quite quickly with a number of different versions of rules over a few years aided and abetted by the excellent Orcs in the Hills magazine (from whence the original idea for this website came). I was one of the people that got into it through the Beatties hobby stores that used to be scatered through the UK and my first version of the rules was the Deadloque boxed set closely followed by the original boxed set. I've been lucky enough to be part of Flintloque's growth and am in relatively regular contact with both the people who ran it then and the people who run it now and as such every now and again something grreat arrives in my inbox. A couple of weeks ago Mac Coxhead, one of the games' original creators, sent me through a copy of the original Frontispiece (including the Valonic version of Over the Hills and Far Away) and now as part of Orcs in the Webbe's Flintloque Archive project during the site's tenth anniversary year I share it with you. I've copied the text into the site below each image for ease of reading (which means you can use the text size buttons [A+] [A] [A-] in the top left of the article as normal). 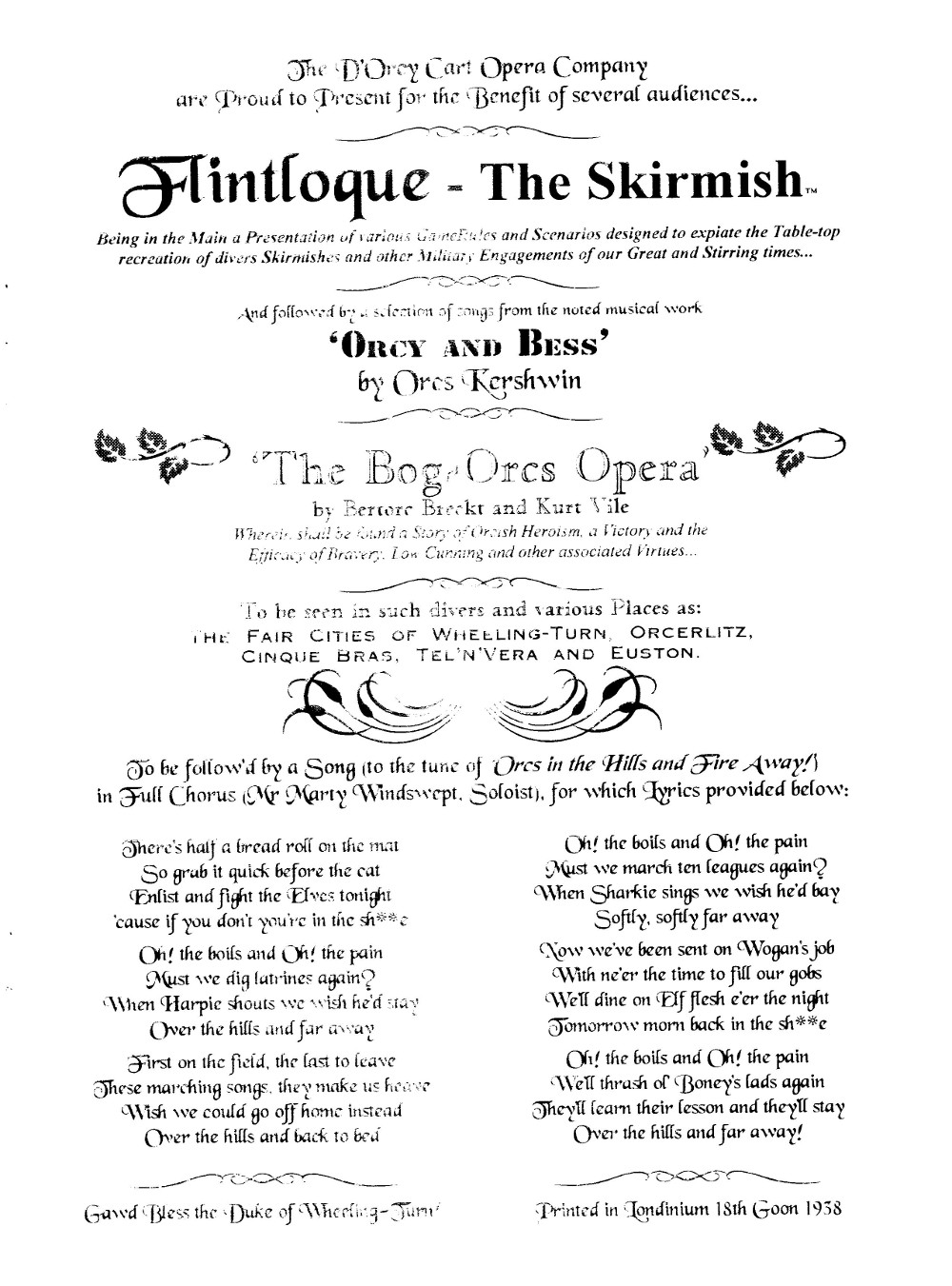 The D'Orcy Cart Opera Company
are Proud to Present for the Benefit of several audiences...

Being in the Main a Presentation of various GameRules and Scenarios designed to expiate the Table-top recreation of divers Skirmishes and other Military Engagements of our Great and Stirring times...

'Orcy and Bess'
by Orcs Kershwin

'The Bog Orcs Opera'
By Bertorc Breckt and Kurt Vile

Whereas shall be found a Story of Orcish Heroism, a Victory and the
Efficacy of Bravery, Low Cunning and other associated Virtues...

To be seens in such divers and various Places as:

To be followed by a Song (to the tune of 'Orcs in the Hills and Fire Away!'
in Full Chorus (Mr Marty Windswept, Soloist), for which Lyrics provided below:

Oh! the boils and Oh! the pain
Must we dig latrines again?
When Harpie shouts we wish he'd stay
Over the hills and far away

First on the field, the last to leave
These marxhing songs, they make us heave
Wish we could go off home instead
Pver the hills and back to bed

Oh! the boils and Oh! the pain
Must we march ten leagues again?
When Sharkie sings we wish he'd bay
Softly, softly far away

Oh! the boils and Oh! the pain
We'll thrash ol Boney's lads again
They'll learn thier lesson and they'll stay
Over the hills and far away!

Gawd Bless the Duke of Wheeling-Turn! 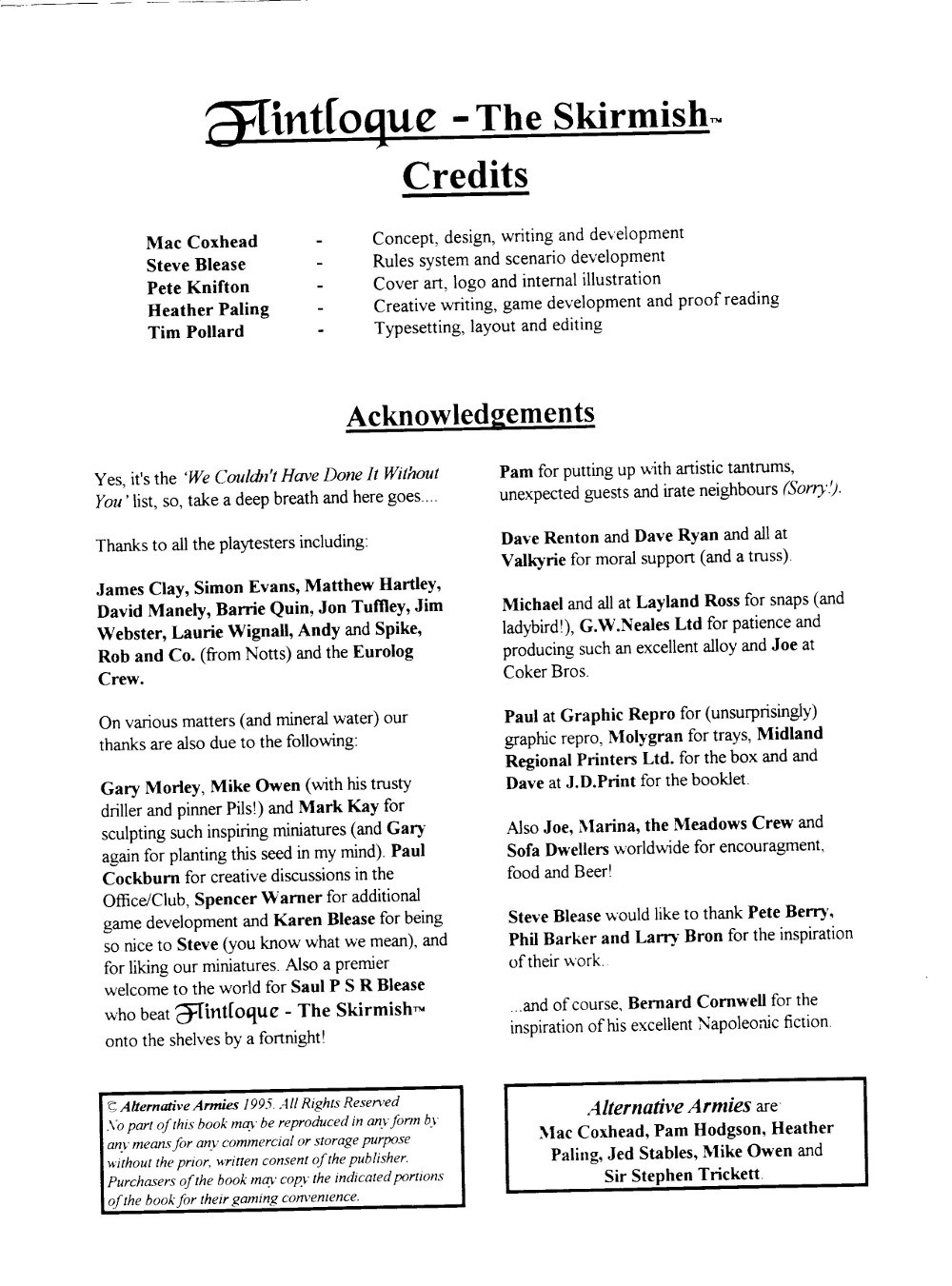 Yes, it's the 'We couldn't Have Done It Without You' list, so, take a deep breath and here goes...

Thanks to all the playtesters including:

On various matters (and mineral water) our thanks are also due to the following:

Gary Morley, Mike Owen (with his trusty driller and pinner Pils!) and Mark Kay for sculpting such inspiring miniatures (and Gary again for planting the seed in my mind). Paul Cockburn for creative discussions in the Office/Club, Spencer Warner for additional game development and Karen Blease for being so nice to Steve (you know what we mean), and for liking our miniatures. Also a premier welcome to the world for Saul P S R Blease who beat Flintloque - The Skirmish onto the shelves by a fortnight!

Pam for putting up with artistic tantrums, unexpected guests and irate neighbours (Sorry!).

Dave Renton and Dave Ryan and all at Valkyrie for moral support (and a truss).

Michael and all at Layland Ross for snaps (and ladybird!), G.W. Neales Ltd for patience and producing such an excellent alloy and Joe at Coker Bros.

Paul at Graphic Repro for (unsurprisingly) graphic repro, Molygran for trays, Midland Regional Printers Ltd. for the box and Dave at J.D. Print for the booklet.

Steve Blease would like to thank Pete Berry, Phil Barker and Larry Bron for the inspiration of thier work.

...and of course, Bernard Cornwell for the inspiration of his excellent Napoleonic fiction.

Special thanks to Mac Coxhead for sending me the files to include on Orcs in the Webbe.