The Goblin in the Smoke: Prelude
"Rise of the Baron" 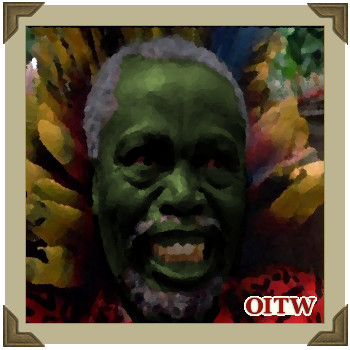 The Windy Isles, One Year Ago

The pirate trio Dubois, Crebain and Glorfindelle had all worked together to defeat the evil Shambog and took his booty for their own. As they'd all had a part in the defeat, Crebain and Dubois agreed the booty should be split equally as per "The Code". However, driven by revenge, still blaming him for the death of his beautiful daughter, Glorfindelle challenged Dubois to a duel there and then. Dubois had no choice but to accept, feeling responsible for his failure to rescue Gloriette on the island of Hatey just over a year before.

The duel itself was a dazzling display of swordsmanship as both Elves had been trained in the Ferach court. In the end Dubois, having the benefit of youth on his side, narrowly won the duel. As per "The Code" Dubois could have finished off Glorfindelle fair and square. However, due to their previous allegiance under the Emperor Mordred, Dubois let the ex-governor turned Ferach privateer go, the life debt now settled the pirate way.

Dubois and Crebain divied up the booty from the mine between them and went their separate ways.

After taking his share of Shambog's haul (not to mention his close brush with death during the duel) Dubois decided he was done with the life of a pirate and retired to Toblerona where he opened an alehouse on the waterfront with his first mate Lejeune, they named it Laiquendé after their old ship.

Captain Jack Crebain however, despite being ludicrously wealthy by any standard you care to measure, just couldn't give up the life or "The Code". After dividing the plunder with his crew and hiding away his cut where no-one would ever think to look he kept plying his trade all across the Windy Isles.

Arry Flassz-orc, having seen how viciously Crebain had dealt with the traitor Shagrob after his betrayal on Isla de los Tratadores, stopped reporting back to his Albion masters before the events on Nuevo Catalucia. However, he too had helped in the defeat of Shambog and after receiving his share of the booty he simply slipped away one night, buying himself passage back to Albion. His actions infiltrating Crebain's pirate band (not to mention the large amount of gold he handed over to the Admiralty) got him his own commision, a light frigate named The Amorous.

Louis Glorfindelle too returned to the seas, still carrying the Ferach letter of the marque, but staying well clear of Toblerona and Dubois.

Now, one year after the events on Nuevo Catalucia, the Windy Isles have become a dangerous place for free traders, pirates and the navies of Valon alike. After many unsucessful attempts in the past, the Halfling slaves of the Windy Isles have finally manged to stage a succesful revolt but they did not do so without help.

That help came in the form of a Goblin Bacci called Cam 'Lucci' Bron. The Bacci are spiritualistic Goblin shaman native to the Windy Isles who, unlike the Ganja inspired followers of Ras Gaffer, follow what they believe to be the true interpretation of the ancient beliefs. They do not smoke the infamous pipeweed, long ago they found a way to prepare it so that it can be used to take control of people, their minds succumbing to a kind of living death.

Because of Bron's help the emancipation of the thouands of Halfling slaves came at a great cost to the once proud race. After taking Jamcakey, Bron immediately appointed himself Baron, demanding the newly freed slaves obey him and him alone. Many were already loyal to him, wanting revenge on the other races for years of servitude and did so without question. Most however just wanted the peace they had fought for for so long, sadly they had no choice. Fearful of being reported by the Halflings loyal to Bron they too followed his orders. His influence quickly spread across to the neighbouring islands. His agents becoming known for their vicious methods. Stories spread that anyone opposing Bron's mandates dissapeared or even worse their minds were taken over, joining his ever increasing retinue of living dead.

It is this dark turn of events that the pirates of the region are now pitched against. Bron's control over the seas is increasing with each week, the pirates know that each day may very well be their last.

The nations of Valon are also growing concerned, the war in Urop is bad enough. They do not need another enemy coming from across the seas.

And if the threat of living death under the comand of a feared and hated vicious Goblin was not bad enough now there are rumours of a ship sailing the Windy Isles crewed entierly by women!

Gods, surely this is the end of everything !

The story continues in Act I of "The Goblin in the Smoke" which can be read here on Orcs in the Webbe.

This adventure was written exclusively for Orcs in the Webbe and was first published on the 5th December 2009 as part of it's 2009 Advent Calendar.

For those of you with a historical interest the Goblin Cam 'Lucci' Bron is very loosely based (apart from the name) on the historical figure of Luckner Cambronne, or more specifically the character he in turn inspired in the 1988 horror film, "The Serpent and the Rainbow".