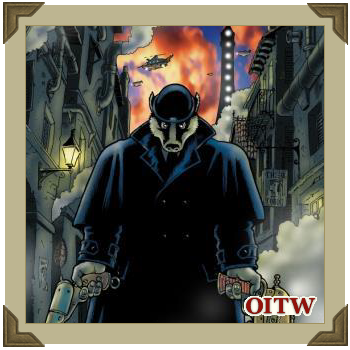 To download this rules supplement from the Orcs in the Webbe Dropbox account as PDF produced by Helena with formatting and lovely pictures click here, - Craig, Editor.

The Badger is Back!

7TV is designed so you play any cinematic style game. If you love a TV show or film and wish you could realise it on the table top - well now you can!
This programme guide uses 7TV 2nd edition rules as laid out in the 7TV Director's Guide and 7TV Producer's Guide. It contains profiles and episodes so you can fight as the furry-faced heroes and villains of Bryan Talbot's acclaimed graphic novel series, Grandville!

New Gadgets: As well as new casts, this programme guide also offers a whole new deck of Grandville gadgets from brolly swords to exploding pipes with which to outfit your heroes and villains.

If you choose to span the genres, you can use the gadget cards from the core rules, from the Grandville gadget cards included in this programme guide, or from a randomly shuffled combination of both sources.

New Countdown Cards: To give episodes that uniquely Grandville atmosphere, this programme guide includes a new deck of countdown cards to evoke the elegant, deadly, action-packed drama of the graphic novels.

If you choose to span the genres, you can use the Countdown deck from the core rules, from the Grandville deck included in this programme guide, or from a randomly shuffled combination of both sources.

New Episodes: New generic episode The Rescue is detailed, as well as a series of original episodes set in the world of Grandville with quick-start casts and special rules already supplied.

The World of Grandville

The world of Grandville is perhaps not so very different from our own. Set in a time period spanning what the British would call late Victorian to the Great War, and what the French would more neatly term the Belle Époque, there are many familiar touchstones of early 20th Century life. Steam trains and country bobbies. Top hats, boaters and corsets. Gatling guns and derringers.

But the people, ah, the people. They are somewhat different.

The vast majority of people are anthropomorphic animals. That is to say, humans with animal heads. And, for what it's worth, four fingers on each hand instead of five. There are ducks and otters, hares, horses and hounds, lions, tigers and bears, all manner of fish, hawks, lobsters, even the odd unicorn and dinosaur throwback. Dogs, cats, rats and of course badgers.

The reason for this remarkable genetic divergence is shrouded in mystery, though popular belief (the Bible is missing the first five chapters of Genesis) is that it all started on the Ark with the Flood and the Lord God Noah. The whys and wherefores of the origin of the species is a matter of great debate among scholars, but verging on blasphemy to those of a conservative or religious background.

The people of Grandville do not tend to discriminate on the grounds of individual species, and on the whole everyone mixes and mingles freely with little or no stereotypical animal behaviour on display. One is as likely to encounter a timid fox waiter as one is an overly aggressive sheep bouncer.

Technology in Grandville has progressed along similar lines to our own up to a point, and then taken a markedly different course into an area some might refer to as steampunk.

In the place of the internal combustion engine and petroleum-driven vehicles, there are steam carriages, steam lorries, steam cycles and even steam chairs. Steam is king in Grandville, with great venting clouds of the stuff billowing out from almost every mechanical contraption and clattering conveyance.

The greatest country in Europe, if not the world, is France. Owing perhaps to the long line of Emperors Napoleon (until the recent demise of Napoleon XII), the French Empire dominates its European neighbours, militarily, politically and culturally.

Its capital, the 'big city' of Paris, is known colloquially to all as Grandville, the largest city in the world. And what a place it is. A sprawling, bustling metropolis, it is a major political and cultural centre, home to presidents, paupers and prostitutes, inventors, entertainers and millionaires. A great deal of wealth and influence flows through Grandville, bringing with it a richly diverse criminal element, from common thieves, street gangs and drug peddlers to well-financed cadres of assassins, sinister cultists and sophisticated organised mobsters.

When Napoleon I invaded Britain and guillotined the royal family, the country was subjected to decades of occupation under French rule. But the Socialist Republic of Britain eventually gained independence after a long struggle by those that the British call freedom fighters, but whom their former masters call terrorists.

The English language is now all but unknown save in pockets of the countryside, and while the British value their hard-earned liberty, the values and morals of their society are in many ways still very similar to their more powerful neighbour and former overlord across the Channel. Though the food
is very different.

The debonair inspector Jules Rocher of the Paris Prefecture is LeBrock's closest ally in the Grandville police and employs similar methods of detection, though he is less physical in his approach to law-enforcement than his London counterpart.

Star Quality: Well Informed*
Take a look at the next face down card in the countdown deck and discard it if you want to.

Either the leader of a local gang in their own right or a trusted lieutenant in a large underworld mob, the career gangster employs a unique mix of brutality and style in the pursuit of law breaking for profit.

Star Quality: Ambush*
Choose an opposing model within 12" that is currently obscured from view by soft cover or hard cover. The Career Gangster and up to three other models in your cast add +1 die to strike rolls against that model this turn.

Special Effects: Get Into Place – as Underworld Boss, Hard, Leader 1

The debonair Chief Inspector Rocher and his delightful wife Cherie find their night at the Shepherdess Follies interrupted when the elusive gentleman thief known as the Phantom Of The Follies swoops down to kidnap the divine Sarah Blairow from the stage. The masked orangutan has been captivated by Sarah's beautiful singing voice and intends to take her back to his secret lair for a private performance…

Rocher's cast comprises Inspector Rocher, Cherie Rocher (use the Bystander profile), three Police Constables who have responded to the commotion and Sarah Blairow (use the VIP profile).

The Phantom's cast comprises the Phantom (use the Career Gangster profile) and three Criminals from his gang. As a villain of some refinement, the Phantom does not allow his men to use sawn-off shotguns.

The episode is set in the Shepherdess Follies cabaret, where the famous Sarah Blairow performs nightly to packed audiences. The Phantom has chased Sarah up onto the catwalks high above the stage.

Catwalks run around all four edges of the playing area. They are wide enough to allow two models to stand side by side. Narrower catwalks criss-cross the space directly over the stage itself, forming a grid of perilous gangways (about 2" apart) which are only wide enough to allow one model to pass along them (or one model carrying a captive - see Special Rules).

Above the catwalk on the playing area edge at the rear of the stage is an open skylight which leads onto the roof.

The Phantom's cast is placed first. They start on any one edge of the playing area.

Inspector Rocher, Cherie and the Police Constables are placed next. They start on the opposite playing area edge to the Phantom's cast.

Sarah Blairow is placed last, at a point equidistant to both the Phantom and Inspector Rocher.

Should any model be pushed, propelled or otherwise moved off a catwalk for any reason, they fall to the stage below and are removed from play.
To capture Sarah, the Phantom or one of his Criminals must be in base contact and take a special action to pass a Body test. Anyone burdened by a captive Sarah suffers a -2" penalty to their movement.
The Phantom's intended escape route is via the skylight. It takes one action to climb up and out of the skylight.

In addition to the usual end conditions in the 7TV Producer's Guide page 20, the game will end if a captive Sarah is moved through the open skylight during play.

Use the standard victory points in the 7TV Producer's Guide page 21, plus these special conditions:

Swinging in the rigging! A bold model may attempt a Body test to grab a scenery rope and swing up to 8" to another catwalk. Any model that fails the test falls to the stage below and is removed from play.

The perilous catwalks are very wobbly! Any model using both actions to move along them must pass a Body test or fall and be removed from play.

MAGNIFYING GLASS
PLAY Model picks up objective token
COST Free
EFFECT: You gain one additional * for picking up an objective token. Even Extras without Gadget gain *.

STEAM SKATES
PLAY Model's activation
COST **
EFFECT: Move this model 12" immediately. May not be used on rough ground. Opposing models may not make free strikes before this movement.

TELESCOPIC SIGHT
PLAY Model's activation
COST *
EFFECT: The range of this model's next shoot strike is increased by 6".

The above rules supplement is an Orcs in the Webbe excusive and was first published on December 17th 2017 as part of its 2017 Advent Calendar.