A Different Kind of War... 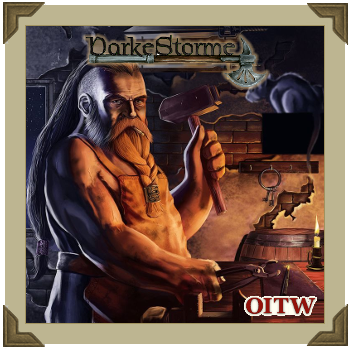 Stoneheart's tale, now in its seventh year, sees Stoneheart sent to explore a strange portal that is ejecting uniformed creatures armed with metal weapons that can fire balls of metal hundreds of yards. What could lay beyond the portal...

So here I am in a time that I don’t bloody belong in.

Once I was the great keeper of Dragon Lore. Now even though I still have my great warhammer I have a new short barrelled gun and I’m selling my services to any army that can pay me.

I am Stoneheart and I live for war and the great death.

Some fifty years ago I was sent by my queen, Leatkind, to help close a strange portal that was sending out Orcs, Elves and Rats that were dressed in strange clothes and armed with what I know now to be called ‘guns’. The ones we captured and interrogated claimed that magic was dead and gone from their world. Concerned that an organised force, perhaps even an army, could come through the portal I agreed to leave my castle, my prison, my fortress on a scouting mission. By this point I had passed on all my Dragon Lore and some of the changes that I had undergone had started to reverse. My height had started to reduce but my strength and age did not match for I had long outlived any I had known.

Leatkind did not want me to leave but recognised that in many ways my usefulness was much diminished and that for long periods all I would do is drink or try and find a fight.

I was I think, to be honest, a bit of a problem for her.

Still the prospect of a fight and a new adventure stirred my bones and maybe death finally would embrace me. I swore that I would enter the portal dressed in the strange clothes on a clandestine mission and, if possible, close or destroy the gateway.

What we did not know then was that that the portal was nothing more than a natural occurrence between one time and another on the same world, a side affect of the Time of Annulment. We did not know that they are not stable, never last very long and the one that I entered was most likely the last.
The portal was but three days travel from the Dragon’s keep. On the day that I left I donned my old dragon armour, chainmail and hefted Deceit, my war hammer. I was given a bag of gold and enough food and drink for a week. I also took a few metal working tools just in case I needed to repair my armour but nothing much. For the first time in decades I felt alive and I clearly remember the rain falling for the whole of the trip.

A troop of guards had already been sent to keep watch on the portal and were killing anything that came through for there was no real willing to know this new enemy. As I approached the guards grew quiet as I was not often seen abroad and I was deeply feared still. There were rumours that I could not be killed. To be honest I still don’t know if this is true or not. I do know that my body seems to be able to heal any hurt given time although, should my head leave my body I am quite sure that would be my end.

I spoke only to the captain of the guard and advised that I would enter the portal and try and close it if I could. He looked upon me as though I was insane but wished me luck. As I entered the portal I felt like my body was being stretched for miles and miles, my bones popped and my blood boiled.
Then all went dark and I woke up in neck deep water that was freezing and stank. The portal was nowhere to be seen and, although I searched for it, I never found any trace.

I did however find a world at war.

Deceit, my war hammer, instantly felt different. It took me a while to escape the freezing water and clear my head but Deceit no longer felt like it was trying to fry my brain when I held it. It was as though it was just a normal battle hammer, the runes that had but minutes ago showed a silvery light now had either disappeared or gave off no light at all. Also my mind was still, no voices or noise at all. It was like the dragon lore were just stories and that I was waking up from some strange dream.

Never one for getting concerned about what is going to happen but what is actually in front of my eyes, I could see that dawn was about to break and so set off in search of finding out where I was. I must have walked for about five hours, all the time noticing that this land was one of mountains that made my heart sing, covered in snow with plunging chasms dropping into the deeps, holding who knew what horrors. One thing was clear though I made out lots of small holdings with dwellings made from stone some with a small type of sheep or cattle.

I had been following wild animal tracks all morning when I came across a small fortification. I decided to build a small fire and cook some oats and see who came to me. The fortification was, from what I could see, a small tower with a stone wall across the trail I had been following. A large wooden door was set into the wall. I imagined that maybe a small ditch would have been dug in front of the wall for it was clear that this fort was to stop those coming from the mountain track.

I was right, it was not long before I heard voices approach. They sounded nasal and I sat ready for battle but really I was hoping to gather information. Three rat like creatures came into view. It took all my will not to rush them and smash their bones. My memories were filled with my dead brethren. Could these be ratkin, no they were rats in uniform wearing checked skirts with the same strange weapons that the others who had come through the portal had used. They also had damned big swords and all of them looked like they knew how to use both.

The one I took to be the leader came forward slowly and enquired as to who I was and what was I doing coming over the mountain. Yes. Enquired, he spoke as well as any Dwarf and knew my language. The trurth would not do for obvious reasons so I decided to say that I was from a small holding and in need of work and that I was a blacksmith looking at gaining employment. This information seemed to cause some excitement; I was asked could I fix something called cannon axles. I decided to say yes of course I could fix axles although never having seen cannon I was unsure of what they were.

Under guard I was asked to follow them, I told them that I had to finish my breakfast first and if they wanted to, they could join me. They said no but to come to the gate when done. Later as I approached the gate I was hailed and a very large rat appeared on the wall. The door opened in the middle and I was let through. The fort from the outside seemed small but upon accessing the door it was clear that the fort was very large indeed. That looking down across the valley I would see a wide road that stretched off to the distance that the land was flat for as far as I could see.

The fort seemed to be a series of walls going down the valley with what looked like a large fortified house in the middle. The walls seemed to be much newer than that of the house. The large rat, who introduced himself as Hamish, directed me to the forge and soon I saw what a cannon was. It was a long tube of metal about two meters in length and must have weighed a tonne or more. The axle that carried the cannon on it’s two banded wheels had snapped. It was clear that both were only joined at certain times. I wanted a closer look at the weapon but was told to simply fix the axle.

As I worked I ncovered as much intelligence as I could. I learnt that they were from a land called Joccia and that they were at war with a type of Elf called The Ferach and had been for about ninety years. There were Orcs here too but they were on the side of the rats from a country called Albion. It seemed to me that I was in the enemy camp. Although I held little love for Elves, I loved Rats and Orcs far less. I helped to fix the axle and looked to leave. Hamish came over to see what the fuss was about I advised that I was looking to be on my way he just laughed and said I was part of the Joccian army now and that we would be engaging the enemy in the coming days. That my skills as a blacksmith were of need and that should I try and leave I would be shot.

My blood boiled no-one told me what to do, he must have sensed my anger as he took a step back. I controlled myself and forced myself to calm down. I still needed to try and find out more about the portal and had no idea as to where I was. I asked what I pay would be and agreed upon one gold, although they called them crowns, every two weeks.

Much later I found out that we were on the border of Catalucia, currently held by the Elves and Al-Garvey, home of Goblins of all things but again a race allied to the Rats. Troops here had been wintering in the mountain fort and were heading back into Catalucia for the start of the spring campaign and that over the next month or two the great armies would meet again for another year of war.

My new adventure was just beginning… 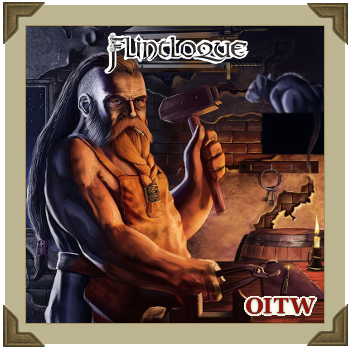 Stoneheart's tale will continue here on Orcs in the Webbe in 2018 as Stoneheart learns more about this strange new world...

The above short story is an Orcs in the Webbe original and was first published on December 22nd 2017 as part of the 2017 Advent Calendar.

Jaffa is a long time friend and ex-house mate of mine who has been my opponent in many battles of Flintloque and Darkestorme. We have long talked about Stoneheart making the jump from Darkestorme to Flintloque and I think Jaffa has done a great job of having that happen in such a way that he can retain all his Oldhammer charm :) I'm really looking forward to seeing where this new chapter in Stoneheart's tale takes him.

You can see the previous Stoneheart tales, in chronological order by clicking on the maroon  Stoneheart  tag just below.

* Note that Mobocanario's artwork has been used without permission and will be removed if rquested by the artist.