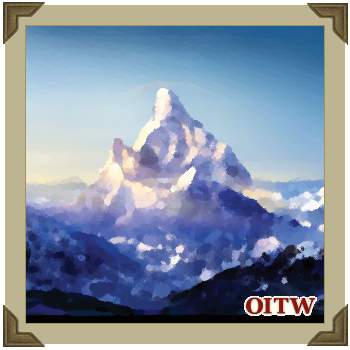 Shunned by his tribe and left to wander the world, Stoneheart is drawn to the mountains where a terrible confrontation awaits...

How do you disappear when you are feared across all the realms of Dwarves. Hated as the slayer of "Thrangar the Just". An act deemed by his kin as an open act of war by the Slayer Tribe. It doesn't matter to them that the other two great kings and many the family saw the demon. As far as they are concerned he was killed by "Flesh Eater the Truth Slayer".

I am now shunned by all.

The Slayer tribe, secretive at the best of times, has gone underground. They have informed the world that I have been expelled from the tribe with no protection, to be given no shelter, liquid or food by any who follow the old ways. They have left the citadel, the sky forge has been closed up and a great magicke has been placed upon the location making it impossible to find. Anyone daring t look  would find themselves hopelessly lost. Eventfully leading to a choice of either jumping into a seamlessly endless pit or leaving the citadel alone.

The items of power have been given to those that had were in attendance.

The son of Thrangar, the new king Carangar, was awarded the sword. The helm and the axe went to the other two great kings. The magickes within each of these items would take a long time to be understood. The elves though were rewarded instantly. The shield went to them for a debt now paid. Many were unhappy with this but the Great Book of Grudgesmise was clear and a debt was owed. It could only really be paid by a piece of armour crafted in the sky forge. Their capital, a place of living magic, joined to the power of the shield and cast a great dome over the whole city and forest. A great many evil creatures simply ceased to be that day and no small number of Elves with evil in them too.

Kardna came to me in the days after I had slain the demon and advised that once again I would be an outcast if for nothing else but to save the Slayer tribe as a whole. The issue was the great warhammer. No-one could touch it. It burned all no matter what armour they wore. Also if I was more than a few feet away from it, it shrieked and made those near drop to their knees, the pain being too great. It was decided that once I woke, it would be seen if I could actually wield the weapon and what effect it would have.

A new leg had been provided for me, as with all things crafted by the Slayer tribe, it had an edged weapon built in and a mechanism that, once triggered, exuded poison onto the blade. From now on even if knocked to the ground, I would have an extra weapon. I decided that If time had permitted I would learn a new fighting stance allowing me to attack with all three weapons at once.

After trying out the new leg, it was time. I had to face the warhammer. Kardna led me to the room in which it was being held. As I approached the room you could hear the shrieking cacophony through the tone walls but, as I approached, the noise seemed to subside. When I entered the room it stopped completely. I reached down and grasped the warhammer. Immediately it screamed again. My mind felt like it was boiling and the blood in my body was on fire. Slowly, oh so slowly, the pain receded. It was still there but more like a store of energy. I felt, alive. I could feel more and no longer simply saw the emotions of those round me , I felt those emotions, and the greatest emotion, emanating from everyone, even Kardna, was one of fear.

As I focused on the warhammer itself I could also feel something else, something coming straight from the weapon itself, something akin to deceit. I bent closer to it,  "Tell me your sin" it breathed. In my minds eye I saw a scene from time and place other than now. A human, clad in armour, looking up at me holding the warhammer. The unnamed human dropped to his knees and begged for mercy, "Tell me your sin" I, no the warhammer, no I enquired of the shivvering human. "I am a spy", he replied. Before I could even breathe I had smashed the warhammer into the creatures chest killing it instantly. "I am Flesh Eater the Truth Slayer and this is Deceit." I said as my mind's eye saw it's foul spirit being dragged through the cobbles towards whichever hell it was destined for. "We know of your dark deeds and I will find and destroy your master. This is my vow. No matter how high or low your place in this life." As my vision returned to the present I focused on my surroundings once more. I attached the warhammer, mentally accepting it's new name, Deceit, to my back. The pain I had been feeling left as it settled into place as if it had been there forever.

Kardna followed me as I left the great citadel asking where I was bound. I said nothing as I simply did not know. I packed supplies and left. My place was that of outsider. A great sense of freedom was upon me. Little did I know at this point that my actions had the effect of the slayers having to leave their citadel and a whole Dwarf family set upon destroying me utterly. I had shown that they meddled in the black arts of demonology. I had set others to looking at their businesses.

Over the next few years I wondered from place to place, working wherever I chose. I was after all a master smith. I travelled to the cities of men, I made weapons for those that could afford them, always working on my fighting skills with my new leg. I trained. I eat. I slept. I hid from my name. I wanted nothing to do with the slayers. I learned new skills and made armour lighter and stronger. I took to sleeping with Deceit, my warhammer. Flowing along the lines of emotions throughout the world. I developed the skill of focusing and reading emotions of those around me to the point where I could easily tell if someone was  telling the truth or not. I found that some races were harder than others. Orcs were the hardest hard as there only real emotion they seemed to show seemed to be that of wanting to kill but actually below there was a longing, a desire to be free and simply roam the plains.

Eventually though, someone realised who I was. I did not really know it but I had been slowly moving North to where the Dragons were said to reside. I had killed a troll and demon. Maybe a Dragon was next. My mind made up, I started to dream of Dragons. I could see one in my slumber and in my waking hours within my mind. A great black one with a gray beard.

I made the decision not to fight those dreams and allowed my legs to wander where they willed. I packed for the cold and set off. Four months later I found myself by a fire on the very edge of the world. I had spent three weeks climbing mountains that seemed to have no end. Finally after a lifetime of cold ice I stood before the entrance to a vast cave. I knew within that a mighty beast resided within. For the first time in years my blood started to boil, a great battle was about to take place, one that I was determined to win. I had no idea why I had to fight this creature, just that I did. I travelled for two days through the depths of the mountain, the trail was not hard to follow for the beast had made an obvious path through the dust that was thick on the ground.

I walked into a great hall, at its centre a vast beast the size of a longboat lay, watching me carefully. "I thought you would never arrive. I have followed your progress and will run no more. You are here to kill me. If you can, then you should use my hide forge both armour and shield. I ask but one thing, protect my daughter. Her destiny is to restore your honour and my race." A human child walked towards me head bowed as if in a trance of some kind.

I lofted my hammer but saw only truth, I hesitated, how could I kill this creature it had called me through my sleep.

“Kill me you fool, I am fighting a battle within, I struggle with a demon. If it gets hold of my form it will destroy this world. One of your race is a fool and plays with magic so evil that it betrays us all.”

A great gout of flame came from the creature as it charged, the flames lit the room and melted the skin down the whole of my left side, my hammer screamed and I charged. My hesitation burned away. I hit the leg of the creature and black smoke bellowed from the skin. Blood and gore covered me. A great pain slashed down my back, my chainmail split and my back bled. As I charged again eldritch energy pored through my veins. Suddenly blue fire engulfed the dragon as another of it's kind, a smaller blue dragon, had appeared and joined the fight. I used the spike on the hilt of my warhammer like a spear and slammed it into the dragon. A great scream erupted from its mouth and the creature crashed to the ground.

The blue dragon shimmered and took the form of a female human child. She looked at me with a cold determination showing in her eyes, "My father is dead, he was the last great prince. He was betrayed by one of yours. I will avenge him, and you will help me."

Exhausted, I fell to my knees, closed my eyes and, almost unwillingly, lay down and slept. I don't know how long had passed but I woke refreshed. I realised that my skin had healed. The scars were great but they shimmered with a blue haze, an after effect of magic.

Stoneheart's tale will continue here on Orcs in the Webbe in 2015 as he takes on the royal family of the iron forge..

The above short story is an Orcs in the Webbe original and was first published on December 13th 2014 as part of the 2014 Advent Calendar.

Jaffa is a long time friend and ex-house mate of mine who has been my opponent in many battles of Flintloque and Darkestorme. I hope you enjoyed this tale featuring his character, Stoneheart, here on OITW as much as I did.