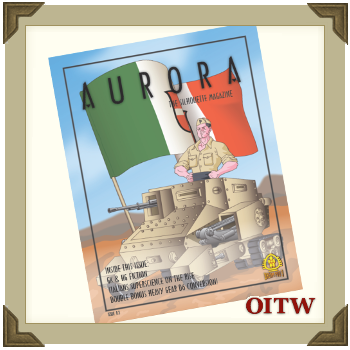 We take a look at the most recent issue of Dream Pod 9's Aurora magazine and give you brief run down of what to expect in each article.

The introduction to the magazine on their website reads:

'Aurora is a publication dedicated to the game worlds of Dream Pod 9 and the Silhouette rules. Our founding principal is to provide a venue for the sharing of all manner of DP9 material, from all manner of sources. Each issue of Aurora is filled with fiction, original artwork, Silhouette rules, battle reports, as well as official updates and tid-bits from Dream Pod 9. We are open to the whole community. We welcome article submissions to be considered for inclusion in our magazine. Submission Guidelines are found in each issue of Aurora.'

I’d never heard of it before but the notification of the new issue popped up on one of my wargames RSS feeds so I thought I’d give it the Written Matters review treatment.

First up I must mention the layout and design. It’s clutter free and in my opinion bloody lovely, it might be a tad minimalist for some though. It’s also massive given the fact it’s completely free, 67 pages.

So then, without further ado, the contents…

Shades in the Night…, Editor’s Message

A relatively harmless little editor’s introduction to the issue. Not much meat on the bones of it, I think I’ve been spoiled by Henry Hyde’s intros in MW.

About the Authors, The Whos and Copyright Information

Does what it says on the tin. I like this being in a separate article at the start as opposed to being at the start or end of each article which is why I did the same thing on OITW (go to tags and type in the name of the author you want to see the bio of, or click on the authors name tag in maroon at the bottom of any article)

I think calling it a graphic novel is a bit of stretch but I think it means the story as a whole. This issue has three pages of line drawn comic strip. The storyline seems quite good and there are a few slivers of ideas in there which you could use in your games.

Gifts of the Gods of Olympus, Mechanical Catalogue & Game Rules for Gear Krieg by John Bell

A cracking article mixing real life people and inventions with the ‘weird war’ setting of Gear Krieg. An enjoyable read with plenty of ideas for adding the Italians to your Alt-WWII games. The rules are obviously for GK but can easily be adapted for any other system.

Special Pull Out Section: Battlelogs: Gears of the North by Jason English

A pull out section in a PDF magazine is a bit of a misnomer but hey ho. Whilst the bulk of this article is (as intended) only of use to Heavy Gear players, featuring one or half page data sheets for the ‘gears’ (think mechs), the one page introduction to the conflict and the following two pages of special abilities has loads of stuff in it to inspire you. A few of those features could show up on a Dwarven tank… Oh and the nice big colour illustrations of each Gear can easily be lifted and printed as tokens to play your games.

Special Pull Out Section: Battlelogs: Gears of the South by Jason English

As above, another nice little one page introduction story, a few pages of special ‘Gear’ features and loads of datasheets for Gears.

Another three page comic strip. Again there’s a few things in there which could inspire a scenario or two. This one is even more racially stereotyped than ‘Kraut Patrol’ with the addition of a few more nations but the overstated accents add to the feel of the Alt-WWII setting.

A single page illustration of a stand off between two ‘Gears’ to accompany the following story. A lovely illustration actually, the sense of motion achieved through the blur lines is splendid.

A lovely piece of writing. A nice story with quite a few ideas one could lift for your own games regardless of if you use ‘Gears’/Mechs. I’ve not read anything from the Heavy Gear setting before but really enjoyed it.

Submission Guidelines, How to Submit Material to Aurora & Article Suggestions, What Aurora is Looking For

Again, these do exactly what they say. Some ideas of what types of articles to write along with quite a number of rules to follow for document size, content etc.

The overall layout is great and worth a look just to see how it should be done and the magazines content is a good source of a few ideas. Definetely worth half an hour of your time with a cup of something hot / glass of something cold (delete as applicable).

This review was written exclusively for Orcs in the Webbe and was first published on the 11th July 2014.