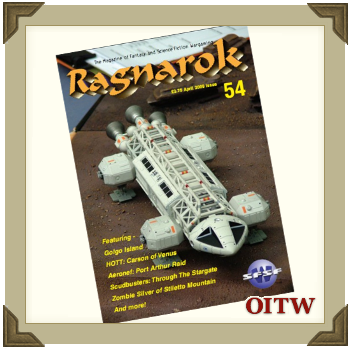 We take a look at issue 54 of the SFSFW journal and give you brief run down of what to expect in each article.

Welcome to the first of a new series of magazine reviews where OITW looks at a magazine and does a mini review of each the articles in it, but mainly with an eye to it’s usefulness for Flintloque players. The big Dwarf will be showing up here along with a couple of other UK magazines but first up is Ragnarok (as mine arrived last week and it seemed like a good idea to start with).

Firstly as an introduction for anyone who’s not familiar with it, Ragnarok is the journal for the Society of Fantasy and Science Fiction Wargamers (more commonly known as SFSFW). The SFSFW is an international body dedicated to promoting the fantasy and science fiction genre within wargaming and the hobby in general. The editorial reins of Ragnarok have recently been picked up by Nick Whittock and with issue 54 (his second issue) now out I’d like to say thank you to him and well done for bringing back the great little magazine.

So, on to it’s contents, not everything is of use to Flintloque gamers but I’ve included a little bit about each article anyways (as I’m pretty sure no one here is monogamous in their gaming habits).

A nice teaser for Edgar Rice Burrough’s little known Carson of Venus book along with stats for using the Hordes of the Things rules to re-enact some of the battles. The book itself is out of copyright and for anyone who likes tales of derring-do from a bygone age can read the book online here.

A rules supplement designed specifically for us players of Alternative Armies' Flintloque.

These nice little rules are, as the author says, not meant for full scale actions (although they could be used for them if you wanted) but to give you some different scenario options enabling you to get a handful of ships on the table maybe as a lead into (or out of) a particular scenario. Whilst designed for use with the Flintloque Reloaded ruleset in particular, they can easily be used with the excellent new Flintloque Third Edition. I’m looking forward to giving them a go.

Scudbusters: Through the Stargate by Peter Barnard

A cracking little variation Wessex Games' Scudbusters featuring the humans of Earth and their struggles against the Goa'uld in the early to mid seasons of Stargate SG1. The article is well written and very fleshed out. It also has notes on expanding the campaign and has some ideas on the inclusion of other races from the Stargate universe.

Whilst on face value of limited use to Loquers it does highlight the excellent adaptability of Matthew Hartley's deck of cards based campaign system. If you're not familiar with it Steve Blease wrote a Flintloque mini campaign using it for Orcs in the Webbe's 2008's Christmas Countdown Advent Calendar featuring everyone’s favourite Ryfle Orc called Sharke’s Hogswatchnight.

Also, for more adventurous players, it's not a massive leap of logic to imagine the portals from Mary Gentle's novel Grunt's showing up on Valon, very much like Stargates they could allow teams of Albion's finest to go exploring strange new worlds (a topic actually delved into in yet another one of Steve’s works soon to be reprinted here on OITW called Grunts in Valon.)

The Port Arthur Raid - A Scenario for Aeronef by Tony Francis

A small scenario introducing Aero-naval forces for the Wessex Games’ Aeronef universe, in particular the 1904 Russo-Japanese war. The scenario itself features a bombing objective and also has links to purchase the models required.

Flintloque and Aeronef have very close ties and there have been some excellent articles published here on Orcs including a crossover of sorts actually written by the authors of Aeronef, it’s called Aeroloque and can be found here.

This is an excellent article which is, in essence, Golgo Island Lite. A short version of the rules with a handful of characters so you can have a go and experience the WarEngine ruleset and the Golgo Island addenda before ploughing through the full rules. You can find out loads more about Golgo Island here. The miniatures for Golgo Island are distributed by East Riding Minatures and whilst not all to my particular taste there are some cracking ones in the mix.

The basic scenario can easily be adapted to use with Flintloque and for any of those who’ve read the scenario I was thinking of using the Golgo ruleset but with some Flintloque mini’s and most importantly using Dodo’s as the creatures it mentions.

Deny The Beachead by Doug from Dark Realm Miniatures

Another scenario this time designed for Dark Realm Miniatures’ free ruleset, Seeds of War (SoW). SoW can be downloaded for free direct from Dark Realm’s website and is designed to use their own line of 6mm miniatures.

The scenario itself can be used a basic scenario seed for any of Valon’s theatres of war, including the recently published Catalucian front. All you need is a fluff paragraph to flesh it out making it relevant for the forces you want to fight.

PDF and the SFSFW by Gary Mitchell

The author of Space Vixens from Mars shares some thoughts about the pros and cons of paper printing of rules verses the distribution of PDF’s.
A cracking little thoughtful article of interest to all gamers who’ve ever purchased a rule book.

If you have not already decided to join SFSFW or at least order the PDF of Ragnarok 54 from Wargames Vault then this should persuade you. Zombie Silver of Stiletto Mountain (ZSoSM) is a complete print and play game where you get to control a desperado searching through an abandoned wild west town that has been over run by Zombies.

Using a gameplay mechanic very similar to Twilight Creations Inc’s Zombies (which I recommend to all) you move tile by tile around the town grabbing gold and shooting Zombies. I ask you, what more in life is there !

From a Flintloque and World of Valon perspective the game would make an absolutely brilliant mini campaign mechanic for a game of Alternative Armies’ Frontear (or any other wild west ruleset). Simply generate up some gunfighters and follow the game system through (using western terrain if you have it) and use the Frontear/Flintloque game system to fight the battles !

The Cauldron, The Melting Pot and The Rules of War

These are respectively Ragnarok’s news, miniature reviews and ruleset review sections and whilst a lot of the information there is available on the web already (most notably on TMP) there were a couple of news items I had not heard about and the reviews are excellently written and give a good overview, especially the 15mm miniature reviews which actually describe the miniatures in question.

And that’s it ! An absolutely packed issue that in my opinion any gamer will find something in that they will both use and enjoy.

To join the SFSFW go to their website here and follow the instructions, and if you want (as with any link you find useful on Orcs) tell them I sent you ;-)

This review was written exclusively for Orcs in the Webbe and was first published on the 20th April 2009, after an absence of a few years it, along with the other few original Written Matters enties, returned to these pages in May 2014.