An Quick Review by Craig Andrews 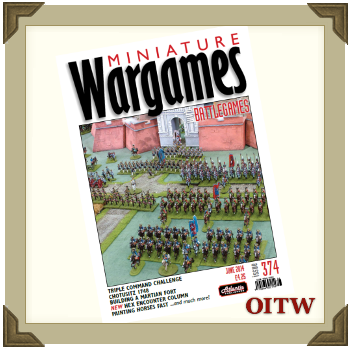 We take a look at the most recent issue of Miniature Wargames and give you brief run down of what to expect in each article.

Today sees the welcome return of Written Matters, in which we look at issues of current generally available gaming magazines and provide mini reviews of each of the articles in that magazine.

As always a lovely little editorial by Henry Hyde. Of particular note to OITW readers are it’s discussion about Age of Sail rules - including rulesets that could be used for Dreadloque and a few suggestions for places to get downloadable tokens/miniatures, one of which is free and well worth checking out.

I love this section, a written article of movers and shakers in the wargames world. The internet has replaced most news sections in magazines (and in most cases the magazines themselves) so it’s nice to see a column like this still holds it’s own. Neil’s writing is engaging and, if you follow the excellent Meeples and Miniatures podcast you can even hear his dulcet tones in your mind as he talks about things. This month Neil talks about Heroes of Normandie, Battleground Fantasy Warfare, Agema Miniatures, smart-phone aided wargames and the new Masters in Miniature photo book.

Diane’s column is titled ‘The Continuing Tales of a Wargames Widow’ and is always a cracking read. This month she shows us how to make flexible roads, both tarmac and country style, using plain old DIY store shed roof felt. A very useful terrain article.

A nice AAR of a multiplayer battle from a period of history I didn’t know much about (ashamedly I had to Google Frederick the Great). It’s a lovely piece with plenty of inspiration for Slaughterloo players in particular given the scale of the battle. One thing I personally found interesting was the format in which the event was run, briefing packs for players, game day timetable etc. Some things I might even try and use in Orcs in the Webbe’s 1st Flintloque Wargames Day in Bristol.

Something overlooked in most wargames, Conrad looks at three very different ways of including civilians in your battles. A superb article of use to wargamers in any genre.

The start of a new occasional series in MW featuring a fictional Roman force invading an equally fictional small island. The layout of the scenario and the included terrain images and maps are superb. The scenario itself to me shouts Pax Bochemannica, it’s even written in a slightly tongue in cheek way, and could easily be played out using the Orcs and Halflings. It even comes with an AAR telling how it played out for the author and some notes on adapting it to other periods.

The monthly haul of Recce reviewed products is up for grabs. Worth a punt ;)

A nice terrain article detailing the construction of a something a bit unusual, a Martian fort. It’s more of a rough guide with some hints and tips than a full article. I would have liked to have seen a few more construction shots (I know I’m spoiled by the detail found in Tony Harwood’s terrain articles).

A detailed article on wargaming during the Russian Campaign of the Mongol Empires expansion into Europe. Well written with notes on how to game and what systems you could use. Also informative, I did not know the origin of the word Horde, now I do.

A four page article covering competition wargaming in the UK for the historical wargamer. I found the article a little dry and over long personally but that’s probably because competition gaming is not my thing. Its scenarios and a lack of points balance (or no points at all) for me all the way.

A well thought out and detailed article on how to paint up loads of horses at once. A must read for Slaughterloo gamers who use cavalry.

A unique little scenario article that takes an American War of Independence battle and transposes it to World War II and 5th Century Britain. A nice idea that could easily be tried out with several different rulesets featured here on OITW. What about randomly choosing a Flintloque scenario and trying it out using Firefight 2.0, the possibilities are endless.

A great little article about board or hex based wargames, you know the ones, hundreds of tiny little counters and books full of reference tables. Well in this article Brad dispels that myth and talks about some of the possibilities of these games. I personally love them (although I tend to prefer playing them using Vassal, that way a sneeze can’t dislodge an entire fore in one fell swoop). It even has a run down of the author’s top five games.

This article starts off looking like a good guide to running an 18th century campaign but as with the Martian Fort article it;s more of a rough guide than a step by step, heavily referencing a commercial ruleset called Wars of Absolutism. There are plenty of ideas though that an enterprising mind could easily apply to any campaign.

Eight pages of reviews of books, rulebooks, and accessories.

The monthly update on the progress towards the £20k target of fundraising.

Another great issue of the magazine with enough variety to keep most wargamers entertained for an hour or so over a pint or cup of tea (depending on your preference). At £4.25 for the printed copy I think its worth it as a couple of the articles are crackers. I subscribe to the digital edition from Exact Edition for PC/Android and pay £29.50 a year making it a ludicrously low £2.45 per issue (which these days you get to download as a PDF along with access to the back catalog of both Miniature Wargames and Battlegames going back to June 2010)

This review was written exclusively for Orcs in the Webbe and was first published on the 23rd May 2014.