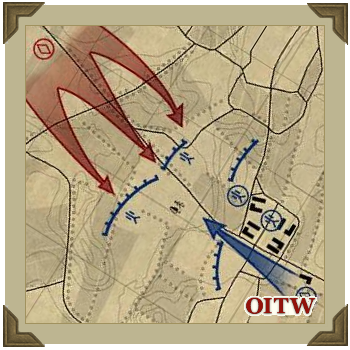 A somewhat grandiose introduction for what is effectively the 2017 launch of Orcs in the Webbe.

I've been busy since the end of the 2016 Advent Calendar being a full time stay-at-home Dad coupled with the setting up and running of the Pledge Manager for Word Forge Game's superb Devil's Run: Hell's Highway but now I'm back.

Starting from April 2nd (as it's not a joke) there will be weekly updates on OITW including scenarios, rules, titbits and much much more for a plethora of games including (but in no way limited to) Hysterical Games' Panzerfauste, Alternative Armies' Flintloque and Maveryc's S.P.Q.oRc.

April, for instance, will see at least one article for each main system, including:

Assassins – A scenario for Panzerfäuste in which a crack squad of five Orc Commandoes have been chosen for a mission in the perilous mountains of Tôrg Baraz to ensure information sensitive to Branzhûm does not fall into Dwarven hands.

Giglamps and the Prince – Last year as a reward for all those that supported the site I offered to write a scenario featuring a character or system of their choosing. The first of these “Reader’s Rewards” has finally been finished! A scenario set in Valon, the home of Alternative Armies’ Flintloque, which sees Bob Minadeo’s Giglamps very much out of his element as he is summoned by the Kyng to partake in a tale of cloak and dagger antics deep in the heart of Afri.

The Measure of Nome – A scenario for S.P.Q.oRc introducing Centurion Shakslag Brutalus and Noman architect Ugnob Jumpedupicus as they discuss Nome’s plans for one small foggy valley deep in Bochemannica miles away from anywhere, except for three warring Boche tribes and a hitherto undiscovered ancient well...

And we’re not done yet! Going back to OITW’s original mandate of supporting ‘lost’ games there will also be a few new additions supporting games that whilst perhaps not lost, have stumbled out of the public eye.

The first of these will be old rescued articles for Christophe Boelinger’s superb fantasy strategy game, Dungeon Twister. Dungeon Twister is, at its core, a game that sees two opposing teams of prisoners from the world of Targane attempting to escape from a fiendish mechanical dungeon of the nefarious Arch-Mage. Imagine Blood Bowl’s underground cousin, Dungeon Bowl with no ball and each team a mix of different races all with unique powers to aid in their escape.

The second of these will be more content for a ‘lost’ game already supported on OITW, Kevin Barrett and Jordan Weisman’s Shadowrun Duels. The fantastic skirmish game that uses unique gaming pieces, each character being represented by a 6 to 9 inch action figure no less.

And that, as it stands, is the start of my plans for 2017. I hope you enjoy the journey as much as I’m going to.

The above blog entry was written and first published on Orcs in the Webbe on the 30th March 2017.