The Orcs in the Webbe Christmas Eve Interview

An Interview by Craig Andrews
with Rob Alderman of Hysterical Games

A return to form with the Christmas Eve interview this year as Rob Alderman, the man behind Hysterical Games, sits down for his first OITW grilling...

Q: For anyone not in the know, what is Panzerfäuste and who is Hysterical Games?

In 1998, Steve Blease and his company, Wessex Games, released Panzerfäuste – a Historo-Fantasy wargame set in his fantasy world ‘The Land’, a place where, in Panzerfäuste, Orcs, Dwarves, Gnomes and more have developed beyond most fantasy settings of swords and sorcery, but now use machine guns, bolt action rifles and armoured war-beasts (tanks!) to name but a few.

In 2014, I decided that it would be ace to re-launch this game with a new company on the crowd-funding platform, Kickstarter, with a new range of figures, updated rules, expanded background and all new artwork. Essentially, I wanted to meet the full potential of Steve’s fantastic idea and throw it onto the modern scene of miniature wargaming using up to date manufacturing technology and methods.

Q: Why did you decide to relaunch Panzerfäuste, what made you choose it over any other system?

I have been a fan of Historo-Fantasy wargaming since I first found out about Flintloque as a wee 8 year old in a toy shop in Banbury, North Oxfordshire. They had a rack full of the stuff, and I parted with my pocket money and took home a set of Orc Camp Followers. At the Wargaming club I used to attend in Abingdon, we used to play a lot of Flintloque, but also Panzerfäuste. So they’ve always been on my mind!

At the time I decided I wanted my own slice of the pie, Flintloque was (and still is) very active, whereas Panzerfäuste was on hiatus for one reason or another, and I simply saw potential in it – so decided it was Panzerfäuste I would try to ‘resurrect’.

Q: What made you go for digital modelling over traditional sculpting?

Digital modelling allows for a lot of changes in the process that would be difficult when using traditional sculpting methods. It was so important for us to get those details just right that we felt like it really was the best way to achieve that moving forwards.

It’s also a statement about moving this particular sub-genre forwards. We wanted to align Panzerfäuste with other contemporary miniature games in terms of how it is designed and manufactured. This is also why we are favouring resin casting over metal, though we are starting to move some pieces into metal after a lot of consumer feedback!

We’ve worked with a few 3D artists, but we seemed to have settled on the fantastic hands and mind of Heriberto Valle Martinez, whom you interviewed a few days ago! He’s a lovely bloke.

Q: In the next edition of Panzerfäuste what are the major changes and or revisions in the rules of the game over the previous editions?

Much of Panzerfäuste Skirmish is remaining the same, however, we will also be including rules for using the new races we have released since then (Deathless and Skogtrolls) as well as new unit types, such as the Brutes, Cavalry and the Armoured War Beasts!

Steve has also been working hard on expanding the background and, whereas the original rulebook was fairly generic in terms of timeline, our new Rulebook will focus on the earlier periods of the Great Dwarven War. This will give us a great point to build from in terms of future releases and expansions.

Q: Will there be one book for Panzerfäuste, or will there be several books released for the new edition? i.e. is there a rulebook, one or more background books and/or any army books? Or will it be one volume?

The aim is to release a Main rulebook for each of the games, Panzerfäuste Skirmish and Panzerfäuste Mass Battle, then future Campaign books will contain rules for both game systems, as well as background. We’ve started getting concepts together for the next campaign book, Operation Mountain King. It keeps getting pushed back, as we’re still developing the first rulebooks!

Q: Will the two Panzerfäuste games be released as rulebooks only or as a boxed sets? And will those rulebooks be available digitally?

Rulebooks only to start with, so far everything we have published is available digitally from Wargame Vault and I would imagine that will be exactly the same moving forwards.

That said, we have made a Starter Pack available, ‘Panzerfäuste Unarmoured’ which is available from our webstore. This contains the quick start rules for the Skirmish game, as well as some Orcs, some Dwarves and some Dice to start playing the game with.

If we do make ‘Starter Boxes’, we might have to explore options in hard plastic. It’s something I’ve been looking into for a long time, but it’s a big old end goal with huge upfront costs!

Q: Are there any new Nations or Races in these new editions?

Yes, the Deathless are a new faction entirely! A combination of Eastern European demons from their mythology (Likho, Khort and Rusalka) and undead hordes, they are a separatist faction inspired by the Russian Civil War. There are also the Skogtroll (Forest Trolls), who are the ‘Norwegians’ of Panzerfäuste and were actually announced in a previous year’s OITW Calendar... (You can read Steve Blease's original article featuring the Skogtroll here on OITW - Craig, Editor)

That’s not even adding the various Brutes, such as the Ghul for the Gnomes – inspired by Algerian Goumiers – they will also feature heavily in the Great Desert War campaign further down the line. 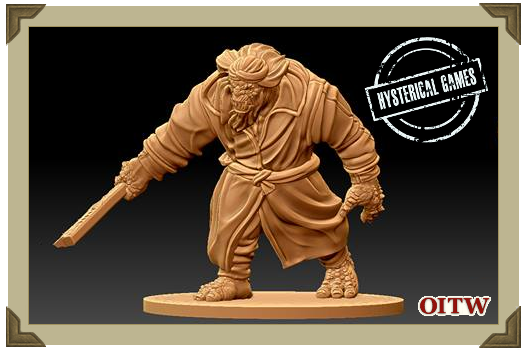 We also expect to introduce new races in the future, as the campaign develops into new territories.

Q: What other releases can we look forward to in 2017?

Well, we really hope to announce our second Kickstarter project, Operation: Mountain King – which will introduce the Dark Elves and the Vuoritroll (Mountain Trolls). It will be inspired by the Russian Invasion of Finland in 1940. 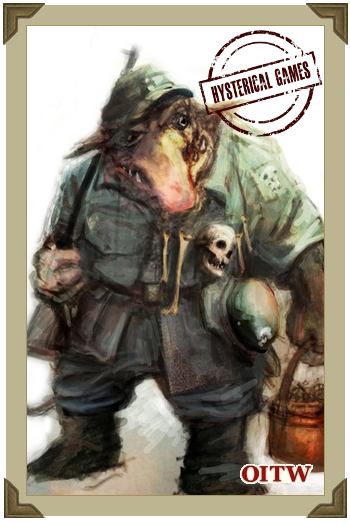 Hysterical Games will also (hopefully!) publish a new expansion for S.P.Q.oRc – which will introduce a new race of Noman Auxillia, Siege Weapons, Magic, Musicians and Standard bearers as well as some special characters and perhaps a couple of scenarios to use them in. The story will follow a few characters (Issvace, Mandii, Tvacii and Cheesy) we released earlier this year which were sculpted by the very talented “Dagenham” Dave Toone.

Q: You've recently released a new version of Wessex Games PZF 'spin-off' Futbowel? What prompted that decision and how has it been received? What plans do you have for it?

Well it’s a one off piece that was inspired by a crazy idea I had for a piece of artwork around this time last year. One of our artists, Gregor, pulled it out of the bag so that we could say Merry Christmas to all of our supporters. Steve and I decided it would be super cool to make a fun set of miniatures with some Beer and Pretzel rules based on the original Wessex Games Futbowel rules.

It’s been received really well! We’re looking forward to seeing people have fun with it.

As for future plans, we don’t really have any yet, but if enough people ask us to expand it, I’m sure we will.

We certainly hope so. We’ve actually been slow burning a few projects in the background that we can’t talk about just yet! With S.P.Q.oRc and Panzerfäuste both bubbling away, I think adding another project right now would be mad. But saying that we have re-mastered some figures that Wessex Games had made by Bob Olley a few years ago. That’s all I’ll say for now!

Q: The rules devolopment doesn't seem to have been as focused as the miniatures side of things? Why is that?

It’s the nature of a Kickstarter project and actually very common. Rules require significant development, layouts and editing. No heels being dragged here. I’ve just finalised all the rules for the Orcs, Gnomes, Deathless and Dwarves in Mass Battle. I’ll be working on the Troglodytes over the Christmas period and handing them over to Ian Hill to pop them into the rulebook. Steve’s promised to wrestle with the Skirmish rulebook over the Christmas period too.

However, we are doing our best to try and satiate people’s appetite for games of Panzerfäuste! We’ve actually released Quick-Start rules and playtest rules on our Wargame Vault page, as well as a host of content on this very website that gamers have access to (with loads more classic Panzerfäuste content coming in January - Craig, Editor). Just as we do not yet have a complete range of figures, we do not have a complete set of rules ready to release. It will come with time, and when it does come, it will be worth it!

Q: Can you tell us what's happening with The Quartely magazine? The first two issues seemed to be a great success and many are waiting for another edition to get more material to read about The Land. What can we expect in terms of releases next year?

Mainly, we are waiting for me to write an article for it! It will come, but the name has changed to G2 as we recognised that setting a quarterly magazine when we may not be able to hit that target was an accident waiting to happen!

We expect it to be more regular once the Rulebooks are finalised and out in the public.

(Panzerfäuste G2 Issues One and Two are both available over on Wargame Vault right now! - Craig, Editor)

Due to the risk of potentially missing a deadline, there is no set date for the release of these, but we will start shipping Kickstarter backers their copies before we start to sell them!

We are hoping for a Salute release, but we aren’t going to bank on that.

Orcs in the Webbe woud like to thank Rob for his time in answering these questions and looks forward to a cracking year full of Panzerfäuste in 2017!!!