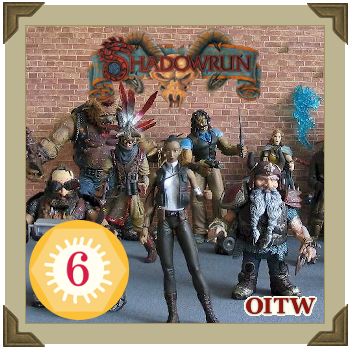 In this scenario, a group of shadowrunners have been hired to sneak one of their own into a corporate building. Opposing the runners is a team of hired corporate muscle anxious to repel any assaults on their employer.

“Infiltrator” may be played as a linked scenario with “Planting the Virus.”

Teams should be even in points. Dice for choice of attacker or defender. The attacker must choose one runner to become the infiltrator.

The infiltrator must be given at least one piece of black equipment to allow them to access the data store once inside the building. If “Infiltrator” is played as a linked scenario, please refer to “Planting the Virus” (coming soon to Orcs in the Webbe ;), - Ed) before equipping the infiltrator. Equipment will not be able to be replaced once the scenarios have begun.

Each team takes turns placing 1d4 + 3 pieces (total, not per team) of terrain on the battlefield. The defender places first.

The game should be set up with teams deploying more than 5ft across from each other (i.e.; on the short board edge of a 4X6 table). Each team deploys at opposite ends of the battlefield with their dials placed against the edge. Defender places first.

Breakaway: This scenario uses a similar convention to other Wizkids games. If a shadowrunner is in base to base contact with an opposing figure, they must make a skill check (yellow or white/body 10) to break away. Runners can move normally after breakaway occurs. Please note: the breakaway dice do not count for movement enhancement.

"Infiltrator" was written way back in 2003 and has been included in the 2019 Advent Calendar with kind permission from the author. It was first published on Orcs in the Webbe on Friday 6th December 2019.