The Raft of the Medusa

"The Raft of the Medusa" 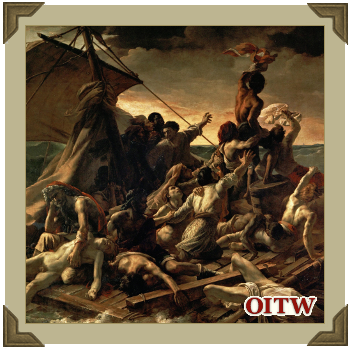 Players take on the roles of shipwrecked crew afloat in the North Atlantic Ocean in 1816 in this brand new and original game by Matthew Hartley. Being one of a handful of survivors your comrades have succumbed to starvation, thirst, madness and despair. You must make hard decisions in order to survive until rescued. But beware, your choices make come back to haunt you when you are eventually rescued...

The Raft of the Medusa is a multi-player game, best played with at least 6 players.

The year is 1816. Each player represents a shipwrecked crewmember aboard a raft floating in the North Atlantic Ocean, west of Senegal. Of the nearly 150 original passengers and crew on the life raft, only a handful remain, the rest having succumbed to starvation, thirst, madness and despair . They must survive until rescued.

The Game Set Up

The game requires two decks of playing cards. One is called the Day Deck and includes 1 Joker. The other is called the Action Deck and does not include any Jokers. Aces count as value 1.

Each player also needs paper to write down their action for each day, and a ten-sided dice or similar marker to indicate their current state of health.
A number of cards or tokens mark "weapon", "food", "body", "body (eaten)" are also required.

Each player begins the game with a Health level of 8. Should a players health every fall to zero, then that player's character is dead. They are out of the game and a "body" card is placed on the table.

The game is played in a series of turns. Each turn represents one day.

Each turn has three phases; New day; Actions; Starvation. These phase are played in that order simultaneously by all players.

Each player may perform one action per day.

There are a choice of 4 actions; Fast and Pray; Scavenge; Make a Weapon; Attack.

Each player writes down his action and all actions are revealed simultaneously. Players may discuss their choice of actions prior to writing them down.

Actions are resolved in the order: Attack, Make a Weapon, Scavenge, Fast and Pray

The player attempts to ward of hunger by meditation and prayer.

The player calls the names of a suit (diamond, heart, club, or spade) . The top card of the Action deck is revealed. If the player was correct, he takes a "food" card.

The players calls out a colour of card (red or black) and a suit, and a card is drawn from the Action deck.

If the revealed card is of the colour and suit called by the player and has a value less than or equal to the players current Health, then the player has caught a gull or similar. The player takes one "food" card and increases his Health by 1 (to a maximum of 10).

If the revealed card is of the colour called by the player and has a value less than or equal to the players current Health but is not the correct suit, then the player has caught a little fish or similar. The player takes one "food" card.

With all other results the scavenge attempt has been unsuccessful and the player gets nothing.

The player attempts to make a weapon from wreckage or the bones of fallen comrades.

The player calls a colour. A card is drawn from the Action deck. If the player has called correctly, he may take a "weapon" card. Otherwise he gets nothing.

The player attacks another seaman with the intention of killing and eating him.

When writing down an Attack order the player must specify who he is attacking.

All attacks are resolved simultaneously, unless two or more players are attacking the same player, in which case these combats are resolved first. If the sequence of other Attack resolutions appears to be important, roll a dice to determine the order of resolution.

Each player involved in an attack, either because they have written an Attack order or are the targets for one or more Attack orders, draws a card from the Action deck and adds the value of that card to their current Health score. This total is called an Attack score.

If a player has a "weapon" card he may draw an additional card and add that to his Attack score.

If two or more players attack a single player then their attack scores are added together.

Each player now compares the total of the Attack scores against him to his Attack score. The player(s) with the lowest attack score is killed. A "body" card is placed in play for each player killed.

If the Attack scores are equal, all players involved are killed.

There are three players Marcel, Emmanuelle, and Pascal. Marcel and Emmanuelle each have 6 Health, Pascal has 5 Health and a Weapon.

Each player draws an Action card. Marcel draws a 4, Emmanuelle draws a 7, and Vlad draws a 3. Pascal draws an additional card, a 5, because he has a weapon.

Had Marcel and Emmanuelle not both attacked Pascal, preventing Pascal's attack on Marcel, Marcel would have been killed by Pascal. The total Attack score against Marcel from Pascal being 13, compared to Marcel's Attack score of 10.

Any player who does not hand in a "food" card during this phase looses 1 point of Health.

Any player may give or trade a "food" card with another player. The trade may be for a "weapon" card or a promise of future aid.

If a "body" card is in play a player may eat part of the body. The player gains a "food" card.

At the end of the turn, a card is drawn from the Action deck once for a body for each player who has eaten part of that body in the current turn. If any of the drawn cards are black, the body has been used up and the "body" card is replaced with a "body (eaten)" card.

The authorities will take a dim view of murder and, particularly, cannibalism.

If there are any “body (eaten)" cards in play when the Joker card is drawn each surviving player must write down who they are blaming for the eaten bodies. Players may not confer. If there is at least one "body" card in play, a player may accuse a dead player (i.e. the "body" card) of cannibalism. All players’ accusations are revealed simultaneously.

Any surviving players who are accused of cannibalism will stand trial. Each player on Trial calls out a colour, one card is drawn from the Action deck. If the player’s calls correctly, he is set free, otherwise he is taken away and hung.

Any surviving players win the game.

The Real Raft of the Medusa

In June 1816, the Medusa, flagship of a French expedition to repossess the colony of Senegal from the British, set sail but ran aground off the desolate West African coast. The evacuation of the frigate was chaotic and cowardly - 146 men and one woman were herded aboard a makeshift raft which was then abandoned in mid-ocean, cut loose by the convoy of lifeboats which had pledged to tow it to safety. The drifting raft carried those who survived to the very limits of human experience. Crazed, parched and starving, the diminishing band slaughtered mutineers, ate their dead companions and organized a tactical extermination of the weakest among them.

Among the ten survivors from the raft were two men whose written account of the tragedy catalogued a trail of government incompetence, indifference, and cover-up. Plus ça change.

Although the game features a trial for the survivors, and their possible execution for murder and cannibalism, the real survivors were not punished by the state. Even the Captain who abandoned them to their fate received only a three year jail term in a trail widely regarded at the time as a whitewash.
Théodore Géricault's 1819 painting The Raft of the Medusa, which he produced after interviewing survivors and building a life-size replica in his studio, is heralded as one of the most influential works of French Romanticism. I first encountered the punkified version of the picture on the cover of the Pogue’s 1985 album “Rum, Sodomy, and the Lash”.

If you’d like to read more about this tragic fiasco, I recommend Medusa: The Shipwreck, The Scandal, The Masterpiece by Jonathan Miles (Random House, 2012). For those with shorter attention spans, or a rock-folk temperament, The Levellers provided a perfectly serviceable account in their song “Raft of the Medusa” from the 2012 album “Static on the Airwaves”.