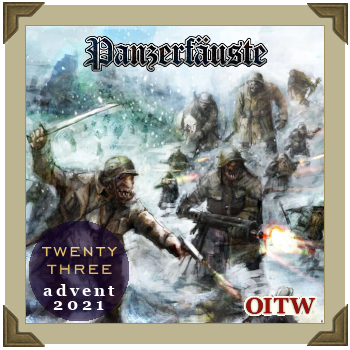 On a cold, wet and foggy night a unit of Orcs, morale running low, discuss strategy...

Pools of murky water were building on the fields and then rushing into the deep trench, damaging the already dwindling morale of any troops unlucky enough to draw that rotation. It was cold, wet and pouring wetter, foggy, and worst of all, boring. The poor weather had dragged on for a fortnight, and everything seemed to be at a standstill on all fronts. Clumps of two or three soldiers huddled here and there, using tarps or discarded armor plates to keep the elements away to the best of their ability. Portable stoves had crowds gather round them whenever anyone managed to keep them burning long enough to brew something hot up. Canteens clinked and clanked merrily against each other as they were held up for a serving, but not even the very last reserves of AlmighTeaTM, no matter how steaming, seemed to be able to buoy anyone’s spirits. If anything, they made things worse, ushering in the scent and taste of much calmer, warmer times and places.

A few steps from the eastern entrance of the command dugout, an argument seemed to arise, loud voices drifting over the constant, monotone rapping of rain. An entire platoon faced their commanding officers in a to-and-fro regarding, seemingly, tactics for the coming battle.

‘What if,’ one of the grunts put in, ‘we stormed out on the right flank, under long range arty cover, make it seem like we’re headed for their supply depot, then quickly turned the bulk of our force West and hit at their own big gun positions?’

A murmur built through the group, interjections of approval and rejection mingling with a disheveled torrent of sounds and gestures.

‘Alright, alright, settle down you lot!’

Lieutenant Murkure grit his square jaw as the noise died down. He hadn’t shaved in a few days, something wholly uncharacteristic for him, personally, as well as the entire Orc army as a rule. But the situation had him at such a loss that he’d eschewed most worldly endeavours, focusing his entire being and energy on trying to figure things out once and for all. Sadly, he was no closer to an answer than when the whole ordeal began. His tongue picked at the stump of a front tusk he’d lost years prior, on a different front of the War. Battles and theatres all mingled and passed by one another in his mind’s eye as he tried to look back on them for any ideas.

‘Listen,’ he continued, his moustache and his audience alike bristling at his call, ‘we can’t bloody well call up arty and waste our final few shells on a hope and a maybe. There’s no guarantee they aren’t getting ready to play something out that completely shuffles about the positions our recon birds glanced at and has us falling into a trap. Plus, our currently developing bid for the skies might fall flat, and we can’t go in blind if that’s the case. The weather’s bad enough as it is, no reason to kick ourselves in the shins even more.’

The murmurs were more approving this time around, but there was still some dissent to be heard.

‘Alright, I hear the grumbles, go on then, out with it!’ the Lieutenant cried out.

‘Sir,’ a hand rose from the rear of the lot, ‘I was thinkin’ we might as well get on with it full bore down the middle, our luck’s bound to turn eventually, right?’

Cries of ‘I’m starving!’ and ‘We’ve already been here ages!’ were also heard and Murkure had to raise his voice to get everyone to calm down again.

‘Private… Mooz-tyen, is it? Don’t worry son, I won’t hurt you, not more than you can do yourself harm with that sort of thinking in our line of work. A bit of luck can always help move things in the right direction, but not when your brilliant answer to a standstill is “let’s just throw everything at them and see what comes of it” for the love of-’ he trailed off and grit his teeth.

Mooz-tyen averted his eyes and his shoulders slumped among the snickering of his comrades.

‘Any more bright ideas to share? Come on, there’s no harm in trying, at least.’

‘What if we put some Pudding Tubes up on the hill to the East to make some noise, they don’t even need to hit anything, really, and send our Commandos up the river at the same time? Takes a while to set up, but if the weather keeps as long as we’re maneuvering, and shifts by the time we can get some pincer help from the wings on the other end… Be a good change of pace, actually seeing what we’re shooting at.’

Murkure seemed to ponder the idea for a moment, then nodded, ‘That’s not half bad, Sergeant Ul-rikk, I was thinking something along the same lines myself. Worse comes to worst we’ll just have to push in through the weather, and that’s that. We can only bide our time so long. Right, if nobody has anything pertinent to add, let’s get at it and hope everything resolves for the best.’

He looked over at his men, sensing their doubt and unease, but he was almost too tired to stand, let alone put together a rousing speech. That was never his thing, either. That was Churg-ill and the high command’s job, he was just there to put things into motion and help point all rifles in the right direction and keep them firing as long as they had bullets on hand and live hands to fire them. He sighed and pinched at the bridge of his nose.

‘I know we’re running low on morale, I do,’ he said, simply. ‘Our enemy is cunning and there’s no doubt luck is on their side.’

An errant ‘Those sons of-‘ floated towards him, but he cut it off before it could get any further: ‘But we’re nothing if not resourceful. We may lack firepower, but we have tenacity for an ally. The terrain is against us, but our legs can carry us past – and very well through – anything that might be in our way. Even the Land seems to bet on our failure,’ he squinted at the pouring skies, ‘but even she must know that when the odds are slim and the deck seems stacked to our detriment that’s when our hearts beat strongest and our brows grow stiff!’

He was seeing shoulders straighten across the platoon, and nods of approval following.

‘We’ve never backed down from a fight and we’re all here together to witness this one, so what say we give the other side a damn good thrashing then head on to face our next opponent?’

Cheers and jeers followed him as they all stepped into the dugout bunker.

The cold, wet greys of the trench gave way to golden, warm glows cast by lanterns strewn on support pillars about the low-ceilinged but rather spacious chamber. A large table took up most of that space, with a standing, wooden board separating the eastern from the western half.

‘Ah,’ Mercure put in just as the last of his men was falling in, ‘and there is our enemy, right on cue!’

Another platoon was just making its way in from the other end, led by a tall, gangly officer with a rather large mouth and a decidedly crooked pair of legs to carry him forward.

‘So,’ Jagk-her rubbed his hands together and gestured at the dugout door, ‘are you all ready to roll?’

‘Quite,’ Mercure nodded and leaned over the table to survey the scene.

Various bits and pieces of the terrain were carefully rendered on it in minute detail, grass and leaves and rocks and all. Several dozen tiny, lead-cast orc soldiers were spread out across trenches, hills, and forests, with various dice, cards, and measuring tapes discarded all about.

‘Your move, sir!’ Jagk-her called over from his end.

Murkure rifled through his cards, set a couple of them down, then looked up, ‘Ready. Shall we see what the weather has in store for us this time around?’

‘Indeed,’ Jagk-her nodded, and drew a card from the top of a mangled, faded deck to one side, ‘It seems to be… still raining like floody hell until further notice,’ he held the card aloft for all to see.

Murkure’s platoon held their breath, some errant smiles starting to creep up here and there, with even the Lieutenant permitting himself a short smirk.

‘Well, if you’re quite done gloating for whatever reason…’ Jagk-her raised an eyebrow as Murkure moved some soldiers around his half of the table.

‘Apologies,’ the latter grinned, ‘we’re just about done, only the matter of some heavy-duty Puddings coming on your left flank, just here,’ Murkure pointed to the right side of his end of the table.

Jagk-her smirked nonchalantly, ‘I’m not worried, with your luck today, this isn’t going to hit anything, let alone anything important.’

Murkure rolled his dice – and missed every single shot.

‘The one thing you have done,’ Jagk-her put in, ‘is give me more solid cover real estate to dig into, so thanks for that!’

Guffaws and hoots accompanied Jagk-her’s turn as Murkure and his men tensed up even more. A new round began, their victory or defeat heavily depending on luck, gumption... and no small amount of lucky rolling.

‘How’s that downpour treating us this time?’ Murkure asked.

‘It just so happens… that the skies are clear!’ Jagk-her called as he drew from the deck once more.

‘And – correct me if I’m wrong – but isn’t it just about daytime also?’ Murkure bared his tusks, grinning from ear to ear.

‘Why, I think it is,’ Jagk-her responded, ‘does… does that mean anything to you?’

‘Well, for one,’ Murkure shrugged, ‘it means we’re getting rid of this pesky fog of war,’ he nodded, and a couple of his men removed the board separating the fronts from one another.

‘But more importantly,’ he picked up a pair of dice, carefully checking Jagk-her’s expression as he started discerning what was coming his way, ‘No, wait, these haven’t been rolling proper all night,’ he threw the first pair clear across the room with a curse, picked up another pair and recomposed his grin, ‘we might have some air support coming. With a +3 bonus to fly in, thanks to the clear weather and the morning light!’

Jagk-her was stunned. Murkure’s strategy was only now becoming apparent, between the Pudding Tube fake-out, the Commandos knocking on the doors of his now grievously undermanned right flank and the Spitfyre Wyverns threatening to bear down on his troops’ other flank with a vengeance – and a +3 one at that – there wasn’t much he could see himself doing to turn things around.

‘How. How? How?!’ he stared Murkure down, his rage slowly boiling outwards.

Murkure shrugged and smirked, but before he could retort properly, a siren started blaring in the distance.

‘Shits and plagues on ‘em all,’ he shook his head and Jagk-her caught his gaze, the two men’s countenances changing. They gave each other a curt nod and turned their platoons around, back into the cold, dreary air.

‘Alright, men,’ Murkure shouted once they filed on out, ‘everyone check your gear, remember your assignments, and take care of each other – there’s no rerolls for this one!’