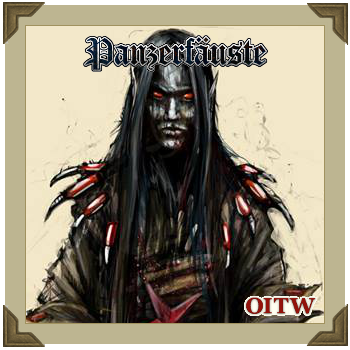 An old custom sees a group of children led deep into the dark forest where ancient words are spoken as something stirs...

Whimpers filled the shadows beneath the trees as the old trogg herded the children further into the forest, a cold, sullen sun setting at their backs and constant, tearful whispers exchanged between them.

Such were the worries and fears the dozen or so younglings uttered under their breaths. They all held hands and walked in a straight line, with their elder’s heavy footfalls following nearby, while he faded in and out of view through the thick vegetation.

They only knew him as Old Zdrekav and they knew not to make him angry. It was said one word from him could drive the very blood from your body, take your sanity away, even turn you into an Endless Wanderer, a ghost doomed to roam the Land in search of unruly children to eat whole.

Where exactly Zdrekav dwelt was a mystery to them. He only came into the village once a year, always on the same day, choosing a handful of children that had ‘come of age’ and taking them into the forest for reasons unknown.

Face hidden under his wide-brimmed hat, Zdrekav deftly steered the children left and right through thickets, pine copses, and thorn brushes. They crossed creeks, went up and down crevices and ramparts, and kept mostly off the beaten path. Wild hornberry bushes scratched and clutched at the little ones’ clothes, startling them as they got tangled and imagined some unseen nightmare fiend was pulling them back into the shadows or beneath the thick undergrowth. Every last one of them would startle at the even soft hoot of a nighthawk and almost jump out of their boots when the wind picked up, making the ancient trees crackle.

One of the scrawnier boys stumbled and fell, nearly pulling a couple more down with him. He got on all fours and started sobbing softly as the others huddled close to him.

A sharp cry left the little one’s chest as Zdrekav pulled him up by his britches, his long, unkempt nails digging into the boy’s clothes, and held him at eye level. Coming face to face with the old trogg made the child’s sob catch in his throat.

Zdrekav’s face was not unlike an old piece of worn parchment - criss-crossed, undulating, myriad scars and expression lines blending into one another, each speaking of another year in a long and hard life. But in spite of everything that was said about him, Zdrekav looked surprisingly like a regular, old, trogg, something that didn’t escape the child as he began to calm down. Seeing the young one eyeing him intently, Zdrekav growled and dropped him to the ground below where he landed with a heavy thud, and then motioned the children forward again.

For three long hours they walked and walked, pitch black darkness firmly set in around them, which wasn’t much of a problem for trogg-kind, but added to the sense of uncertainty and unease that the children were feeling.

Just when most of them thought they could go no further, Zdrekav came out of a side thicket, motioning them into a small clearing and signaling them to wait. Before the children even entered the clearing, Zdrekav was gone again, and they were left all alone. Cold, tired, frightened, and lacking the slightest hint as to where they were, it wasn’t long until they started voicing their frustrations and worries. Loudly.

“My brother was taken here last year…” one of the girls said.

“My brother, too!” the scrawny boy replied.

“I never thought he was the same again” she nodded “always telling me about forest spirits and fallen soldiers… He’s more away than he is home now, nobody tells me why. Why does this have to happen to us? What did we do wrong?!” she cried, to a murmur of approval from the others.

“Wrong?” a croaking voice came through from seemingly everywhere around them “Why would you think you did anything wrong?” it continued.

“Zdrekav?” the girl took a couple steps back, while the group tightened its ranks, in an almost defensive manner “Where are you?”

“We’re not afraid of you, you know?” the scrawny boy’s voice trembled as he clutched at his companions’ clothes “You’re not so scary!”

A chilling laugh filled the air around them, and fearful screams rose from the children’s throats. They all huddled even closer together as the forest grew bright with an orange glow. Torches came alive behind the first line of trees all around them, sending long, deep, flickering shadows into the clearing.
With a deep chuckle, Zdrekav reappeared in front of them, materialising as if from nothing. The children startled and took a few steps back as Zdrekav motioned them all to sit down on what looked like specially placed tree stumps. They did so, still very much as a single unit, and then waited. Shivering, whimpering…

Zdrekav paced slowly in front of them, eyeing them all intently.

“Hark!” he croaked suddenly, scaring one of the young ones off the makeshift chair.

“You have all been chosen to be privy to a secret not many will ever learn. This Land of ours hides darker and more dangerous monsters than you could ever fathom. But you will have to come to terms with reality very quickly, because you will meet one such ghastly apparition tonight.

“Hear now the summoning song of this fel being, and steel your little hearts, for it thrives on your fear and will whisk you away at the first sign of weakness…” he grinned and took off his hat, ruffling his ancient locks and dropping his chin on his chest, eyes closed and hands clasped on the hat, wispy hair moving slightly in the breeze. He started murmuring a melody, his voice getting stronger by the verse, the cadence getting slightly faster as he went on.

A deathly silence took over the clearing.

A song from our forebears, a constant reminder
That blood ties are forevermore.
An old battle cry from a time long forgotten,
Rise now and listen to its call!

Step firmly, brave soldiers, and head ‘cross the mountains,
Our lands must again be made free!
The triumph awaits us with glory eternal,
Rise now, I say, and follow me!

Step forward, step forward, march proudly together,
The evil we face shall be slain.
Run swift ‘cross the mountains, the Arr dell is precious.
Rise now, lest we all die in vain!

By way of the sword did our kin come together
The battles they faced were all won.
That age old alliance stood shoulder to shoulder,
Rise now as one, my children, come!

With a final belt, he stomped the ground with all his might. All the torches died out, plunging the clearing back into pitch black darkness. A single, distant glow began emanating from behind Zdrekav, barely discernible and moving closer, bringing with it a quiet sense of dread.

Soon, a hooded figure carrying a magickal, silver-light torch appeared from behind the thornbrush, seemingly floating across the ground, towards Zdrekav. It paused next to him, almost half again as tall as the old trogg, and cocked its head to the side, gazing towards the stupefied younglings, then with a jerk of its head, shook its hood off.

It was as if the air had been taken out of the forest itself.

A pale, white visage with deep, red eyes stared at the group. Oily, black hair clung tightly to the being’s skull, and a pair of small, pointed ears jutted from it slightly. The being gave Zdrekav its torch, crossed its hands on its chest, and opened its mouth, revealing a line of pearl-white teeth, several of which seemed overgrown to the point of uncomfortable.

It took the young ones a couple seconds to realise what they were facing, but one of them suddenly jumped off the stump, pointing at the figure:
“It’s a v-va-vamp-aaiiieeeee...!” the child shouted before running off into the forest.

In a cacophony of cries and wails, the rest of them followed suit, tripping over themselves, the stumps, or each other as they fled into the woods, without rhyme or reason, losing their way from the path within mere seconds.

The noise soon died out and back at the clearing, Zdrekav and his counterpart exchanged a knowing glance… And then both of them burst out laughing.

The vampire took off the top third of its body, revealing a trogg woman almost as old as Zdrekav, though considerably more well built. He wiped a tear from his eye, then unharnessed himself from the contraption, a crude item built from carved wood and leather, with cartwheels that stuck into a pair of rails leading into the clearing.

Zdrekav put his hat back on and snuffed out the torch.

“We need to think up a new way of culling the weak, Waziy, my dear. One of these days they’ll see through this masquerade and then where will our fun go?”

“Bah” Waziy waved him off as he kicked the cart back into the bush “I’m more worried about some demons hearing your song and actually rising up…” she shot Zdrekav a worried glance.

“Not to worry, every year I change the words and song enough so that even if any of them lie close anymore, the best they’d do is wince at the sound of it and roll over for another hundred years” he laughed and Waziy soon followed suit.

They both left the clearing the same way the children went, following the upturned dirt and mess they left in their wake.

“Tell me, Zdrekav, how goes this year’s lot? Any fresh recruits for the effort?”

“It’s not the best we’ve had” Zdrekav shrugged “but I have my eye on a couple that will make fine warriors once their day comes.”

“Still no end to the War, you think?” Waziy sighed and Zdrekav paused, leaning against an old borrowbranch, gazing through its canopy at the stars beyond. He smiled bitterly.

“I fear the Land will see the end of you and me well before the end of the War, old friend.”