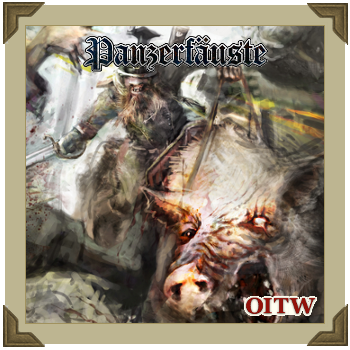 Two Schweinhundereite squads leading twice as many Straftruppen are cut off from HQ waiting for an Orc convoy when foraging fails and tempers begin to fray in this Panzerfäuste short story.

“How much longer are we going to be here?!” the raspy yelp woke the entire team from their slumber.

“Heinz, for the last time, keep it down! This is supposed to be an ambush... Didn’t they teach you what an ambush is in prison?” muffled laughter was heard from the cavalry side of the squad. Scowls retorted from the others.

In truth, they had been there for quite a while and the end of the mission was nowhere in sight. An elite strike team... Or at least that’s what they called them so that the high risk tag of the dossier would fall under the radar. It didn’t. But they were doing it anyway. Either for their country or for lack of choice.

And by lead, it was implied they were herding them. You never knew what the motley bunches of criminals and dissidents would end up doing if left to their own devices. Soon as the Gnomes in the region would teach them the meaning of the word ‘coup’, they’d probably turn coats faster than a strigoi regiment.

After being bunched up in the forest for a week and a half, you’d have been hard pressed to tell which ones smelled worse – the animals or the Dwarves themselves. Some Dwarves were more animal than was perhaps required, chances had to be taken to push for a successful operation.

Their rations had been steadily running out. The Orc convoy they were supposed to strike had missed its weekly run and they had lost communication with their HQ so they were abiding by their set procedure – sit around and wait for the convoy’s next pass. All the sitting around was doing nothing for morale, though.

They were thirsty and hungry. For food and drink as well as some soft, fleshy targets to unload their anger onto.

“You sure there’s nothing to be had in these damned woods?” Braunschweig, the Schweinhundereite Squad Leader for the mission, had started thinning down considerably over the past couple of days. His regular diet - consisting of whatever heart attacks thrive on - had been hard to maintain on a five-a-day basis since the start of it all. The prisoners’ jests as to his plump figure roasting on a spit didn’t help his mental state along either.

“We’ve been out looking every day and all we’ve done is cut through more food and water than we can afford to... Why don’t you put that fat deposit to work for a change, Wachtmeister?” Heinz snapped to the other side’s angry stares.

“Not to mention that pigsty smell’s been driving me crazy for days!” one of his companions cried out.

“It’s been driving the Wachtmeister even crazier if the thinks we can hang on much longer...” Heinz retorted.

He was the most talkative of the prison bunch. Death-row convicts, every last one of them. Their crimes weren’t even all that grievous in part, but the Straftruppen squads had taken a serious hit during the latest reconnaissance missions. The Kaiser was running low on cannon fodder so certain choices had to be made, this being the easiest.

True as it may be that criminals with nothing left to lose aren’t the safest choice to bestow a gun and an ammo belt upon, the Straftruppen had proven themselves worthy and dependable, albeit a touch wild and definitely in need of supervision to get the job done. Or get it done within the confines of reason and decency. But some had actually taken advantage of the chance and slowly started climbing out of the barrel whose bottom they’d been scraped off of. Heinz was such an individual.

His first name was what his superiors called him, for lack of a last name to use – he’d refused sharing it with anyone. But he had carved out a war-moniker for himself – as a crack shot that had boosted his already big ego to cloud-high levels, he was known to most enemies as Ansgar, The Godspear.

He liked to pride himself in never wasting a bullet as long as he’d been on the front. And there really weren’t any survivors to deny such a feat. Even more widely-known was his tendency to quickly assess a situation and take the best course of action for him and his men, no matter the cost and repercussions to others. He wasn’t being paid to mind feelings or common sense. Actually, he wasn’t being paid at all. Not in the regular sense of the word in any case. His reputation had allowed him to talk back to his superiors to a certain extent, a boon that he exercised whenever possible.

“I’d very much appreciate it if you took care of that attitude and kept your men in check, inmate!” Braunschweig spat out the last word with the utmost disgust that he was capable of, prompting his own side of the squad to cheer their approval. A hush fell over the group as all were expecting an explosive reaction from Heinz. Instead, he simply smiled. But that smile proved more unsettling than any furious retort he might have gone with.

“I was thinking...” he started, turning his head toward the plump figures of the pigs lined up near a clump of bushes “Since we can’t reveal our positions to whatever country folk might be roaming around and we can’t just leave for home... We might as well not starve.” the smile had gotten wider and Heinz had started smacking his lips.

“Now the only way I see that happening” he slowly got up and started walking towards the small herd “is by either resorting to cannibalism” he said, piercing the Wachtmeister with a horrid stare “Or making the best of what we were given to work with...”

He was now within reach of the beasts. The Cavalry men all got up as they began to realise what Heinz was getting at. Growls of approval or contradiction were beginning to rise from the two sides, everyone was on their feet, ready to jump at the chance of unloading some of the pent-up tension.

“Wachtmeister, is it not true that while in training your men have been taught how to ride their much-beloved beasts in pairs, so that they can aid injured or mount-less soldiers?” Heinz’ bayonette had come out, glinting in the soft, final hint of sunset that was falling gently through the canopy “Good enough reason for us to bring pork back on the menu...” he said, and the entire Straftruppen squad took it as a signal to charge.

The mood was not the only thing getting dark.

A few stars were coming out on the night sky, and the moon was slowly taking the place of a bleeding sun that was falling out of view. Shortly thereafter, if someone were to pass by the small grove where the Dwarven force was stationed, they might’ve thought a small pack of bears was fighting over a herd of pigs that had broken free from the nearby village... It could have been a reasonable explanation as these things often happened in villages bordering wooded areas, if not for the distinct lack of local wildlife.

Another week passed until the Elite Strike Team made it back to base, the entire operation a failure thanks to Branzhum using false rumors to throw them off their trail.

The returning column was a poor sight to behold, all ragged, battered, and filthy. You could almost see the stench rise up from the battered bodies closing in on the barracks. But the Straftruppen were in high spirits, sauntering through the camp gates as if back from a well-earned leave.

The Schweinhundereite Squads, on the other hand, were less enthusiastic about the return, their shoulders drooping, eyes staring blankly at nothing in particular. In a neat, sullen row, two by two on each mount, they made their way to the stables without sparing the Straftruppen so much as a look.

Leaning against a chainlink fence, Heinz took his bayonette out and looked intently at the Wachtmeister as he came out of the stables. The sun reflected off the blade and caught the intended target’s gaze.

With a soft whimper, the Wachtmeister turned tail and scurried off in the opposite direction.
The rest of the squad approached Heinz, grinning at the sight of the fleeing officer.

“How come? We never got that convoy after all.”

“True” Heinz sighed, then followed it up with a smile “But that was a good number of meals where the Wachtmeister stopped hogging all the food...”