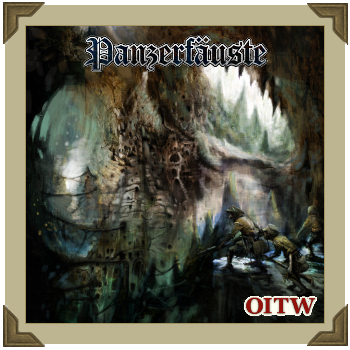 A Troglodyte squad, tasked with escorting a very important General through an underground complex, run into a few surprises along the way.

The sound was echoing along the walls of the hall, across the darkness, making it feel even more stifling, cold and damp. Hewn from the very mountain itself, their mines had long been both a refuge as well as a passageway for the troglodytes since times immemorial.

"They should've been back days ago..." Ferilin Gar whispered, his tail slashing angrily across the floor, sending some pebbles tumbling into the distance. "I don't like the smell of this place."

They all felt it - the angst of being stranded in the underground for almost a fortnight, losing contact with the rest of their detachment, having little to no food at their disposal.

"And that dripping torture of a crevice is driving me literally up the walls... If only I could reach it!" Gar hissed, clutching at his ears.

"Shhh... Calm down..." Cvott Suryn had his eyes closed, leaning against the opposite wall. "The Kapitan knows what he's doing, they'll be back before you know it. Nothing to do now but wait."

"If we move, we risk being seen, Ferilin!" Cvott cut him off.

"Bah..." Ferilin waved the other off "Wouldn't come soon enough. Rather be seen and get this over with..." he argued.

"So what if there's beardies waiting for us up there? A few of us can hold 'em off long enough for the others to get the General."

"The General isn't fit to travel yet!" Ferilin saw himself cut off, this time by Salya, one of the two witches accompanying them.

"And I don't see you taking the blame if anything should happen to him..." Darika, her sister, snapped at Gar.

The others shifted awkwardly. There were eight of them waiting for the Kapitan and his two younger brothers to get back. Escorting the General through the underground was turning out to be a big mistake. They'd been ambushed, wounded and isolated.

And their prized dignitary was getting worse, unconscious and feverish. The witches' channelling of the elements could only do so much for him, he was in need of something more than totems and trances.

"We need to get warm, I'm freezing my fur off... I can only imagine what the General is going through." Alagir, the squad's sharpshooter grumbled, pushing his hat even further down on his ears.

"You're always a bit of a whiner when it comes to being cold, don't you think? What were you, born in an oven?" Mishail, smirked at him. A few of them let themselves chuckle. Yet the echo seemed to amplify their feeble voices to a rolling thunder, so they gave up on that soon enough.

"I saw a dead end on my last patrol, it's not too far from here." Nikola got up, he seemed hopeful. "We could move the General. The tunnel's not that wide over there. We could block it off with our coats and use some of those broken beams we saw earlier to get a fire going." he glanced at the others' shadowy figures.

"That might not be a bad idea." Cvott mused.

A painful grunt from the General made the decision for him.

"Right. Darika, Salya and Nikola, take the General there." he started barking orders. "Gar, Mishail, get some wood from the corridor. Alagir and I are going to hang back and make sure no one knows we're down here."

To their great surprise, everything went down without a hitch. A few minutes later they had stuffed their coats to block what was a very narrow, unfinished passageway into a rather spacious natural cavern with vertical shafts dug straight up, presumably for ventilation. They had already gotten the General comfortable next to a small fire and were feeling their spirits rising.

The light was almost blinding, even if they weren't stoking the flames, but they were getting used to feeling warm again, and even indulged themselves in a few drinks and small bites to eat from their meagre supplies.

Very soon they were all smiling, getting drowsy and their current predicament was beginning to lessen its pressure.

"You know" Alagir had taken his hat off and was rustling his hair. "I could get used to living down here." he'd rolled his hat up and tucked it underneath his head, getting himself snug next to the fire. "No, no, hear me out!" he said at meeting the others' bewildered gazes.

"The mines go on for miles. Branching out, connecting with natural passageways and tunnels and halls. Technically, you could keep hiding down here until the war blows over. Keep our leaders safe as well." he nodded towards the General.

"Beats meeting the wrong end of a bullet head-on."

"Anything beats that, Private. Even freezing your fur off." Cvott smiled.

Alagir's snort of laughter was cut short by the echo of footsteps outside their refuge. Salya and Dorika simultaneously muttered cantrips that swiftly put the fire out from a distance, and then took their places at the General's side in the literal blink of an eye.

"Get those coats down from there and find some cover, I'll go check it out." Gar started creeping towards the exit.

"Not to worry, Corporal, you just get ready to jump out at the slightest hint of trouble. Snapping the Generalat least somewhat out of that state wouldn't hurt either."

Gar headed back the way they came, keeping low to the ground and flush against a wall, the damp passageway keeping him on edge. The corridor widened and one false step and slip would send him tumbling into an echo, no chance to surprise whatever lay ahead, in the dark.
He glanced towards their previous campsite and could see nothing, the dripping water still being heard high above. He turned around and started further down the corridor. Something was wrong. His hairs were on end, all down his back.

He turned on his heels, right into the barrel of a Dwarven Sub-Machine Gun.

"Well, well, well." a familiar voice met him "See boys, this is what happens when you don't follow orders."

"I still think I should be holding that." Yeogar said, pointing at the SMG.

"He did find it after all!" Seriit chipped in.

"Go easy on him, brother" Yeogar put in gazing over at Gar "They've been dripped on for nearly three days, no wonder they moved camp. That is what happened, isn't it, Sierżant?"

"It is indeed." the Kapitan answered in his stead, glancing up and past the fellow Troglodytes "And lit a fire as well by the scent of it."

"How bad is it?" Cvott asked once they were all back together.

The General was in a slightly more aware state, the witches magick had managed to work wonders on a recently warmed-up, albeit still feeble dignitary.

"Worse than we thought..." Kapitan Svoot sighed. "We might've found a way out provided they stay put a while."

Yeogar cut him off, and pointed down the corridor, a flickering light getting bigger by the second.

"Everyone move now!" Svoot snapped through gritted teeth "We're fighting our way out of here if it's the last thing we do!"

They followed Svoot and his brothers closely, and soon they had reached an enormous natural cavern lined in stalactites and stalagmites, several awnings and outcroppings decorating the walls, some thirty metres high. Various luminescent fungi and minerals lent the place an almost ethereal feel.

"Sturmptruppen." Cvott spat as they started making out the enemy, more than seventy metres away across the room, torches sending long, shimmering shadows across the hall.

"Gar, can you help the General along?" the Kapitan started delegating.

"I need you to keep your heads low and choose a flank, we could surprise them." he told Salya and Darika.

"The rest of you, spread out and wait until you can make out the colour of their beards!"

"What about their moustaches?"

His brothers pirched in, but nobody paid them any mind as they all hunkered down and waited, Gar to the back, hiding behind a large stalagmite.

It took forever, but the group of ten Dwarven soldiers finally made it close enough for sure-fire hits.Everyone looked to the Kapitan.

"Hold!" he mouthed to them. The Dwarves had yet to see them.

After scouring the rest of the room, the Sturmtruppen turned back around. Just at that moment, a hoarse grunt echoed all across the hall. The General made eye contact with Gar, seemingly not knowing where he was or what was going on.

It was all over in a series of quick flashes.

Four of the surprised counterparts fell with the first salvo. The others tried to take cover, but were quickly disposed of by a series of stalactites falling straight on top of them courtesy of the witches.

Only two made it out, not even trying to fire back.

"They'll come back with reinforcements." the Kapitan said.

"Alright, tunnel's up there!" Seriit pointed to the wall to their right. "We need to move now!"

Sure enough, with the tumult having died down, the General seemed to be regaining more of his senses, but still needed assistance to scale his way to the passage.

Half an hour of moving at a steady pace went by. The air was getting breezier, light shafts breaking through cracks in the vaulted ceiling.

oon, they came to a near vertical tunnel starting out in a bowl-like shape, just a metre or so off the floor that seemed wide enough for them to climb out through. A clear blue sky was visible above.

"Alright. Here we are." Yeogar smiled.

"That was easy!" Seriit helped the General, now almost standing upright on his own, to the lip of the tunnel.

A cacophony of shouts and footsteps planted their feet firmly back into the dire situation they were still in. Seriit shrugged and smiled innocently at the others' vicious stares.

"Everyone climb, climb, climb!" Svoot pushed them into the opening and hung back, weapon at the ready behind them.

"Not a word, Sierżant! You need all the head-start you can get. Get moving! That's an order!"

A few seconds later, two pairs of feet hit the floor beside him. Yeogar and Seriit crouched next to him.

"How 'bout a chance to even that tally, eh brother?"

"You didn't think we'd let you increase your lead, now did you?"

The noises were getting ever closer. Three rifles were now pointed at the far end of the long hall, marks all across their wooden butts, the Kapitan's sporting by far the most.

"Would you two listen to me for once?" he started, looking over at them.

"I doubt it..." with a heavy sigh and no little amount of pride, Svoot Grolziy took aim again.

They all took a deep breath as the first Dwarven bullet took a bite out of a nearby outcropping...