A Panzerfäuste Scenario by Luke Passingham 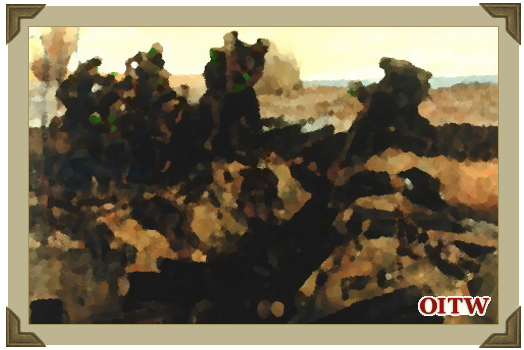 Two squads on opposing sides of the conflict at the Mon-Gerahnt Line are tasked with getting across No Man's Land. Not only is there the risk they may run into each other and that any noise they make may attract the attention of the gun emplacements but also there is the fear that the restless dead buried within the ground may rise to seek revenge on the living...

This skirmish is set in the third year of warfare on the Mon-Gerahnt Line. Desperate for results and to break the stalemate that threatens to slow down his career, Feldmarschall Von Beerburg has sent a squad of his best men out under cover of darkness for a night raid for the allied trenches where they hope to eliminate enough defenders to clear the way for a big push. At the same time (as luck would have it) a platoon of orc commandos is attempting almost the same thing, daring no-mans land between the opposite trenches to capture Von Beerburg himself. The secrecy surrounding both raids has meant that neither side has thought to alert their artillery, who fearing an all out night assault are watchful for any evidence of attack. As the two forces meet desperate decisions must be made as to the risks they run, and old scores will be settled in the shadows.

But wait, there’s more! An unwelcome surprise awaits both forces should they cause enough damage to literally wake the dead...

Set up a 6’ x 4’ table to represent the no-man’s land between the opposing trenches with barbed wire, shell-holes, tank wrecks and so on – you can use anything you wish so long as both players agree. Each side’s trenches run parallel to each other along the opposite shorter sides of the table and are considered the objective at the start of the mission.

The Allied forces start six inches away from their own lines, spread out at least three inches apart from each other. They are determined to capture the villainous Von Beerburg. Blarnes is considered the leader of the Allied force as none of the troops respect Fodder.

The Dwarven force also begins six inches away from their own lines, likewise spread out and ready to strike a decisive blow for their war effort.

The scenario is fought entirely at night (-50% to movement, the Orc’s carrot supply lines have been cut by the Dwarves).

Both sides are attempting to move as silently as possible to avoid drawing attention from the enemy trench and artillery. Should they be spotted each side, assuming an attack by the other, may open fire with the heavy guns they have behind the lines. Consult the following chart for details:

*It is assumed the Phantoms attack with typical Phantom noises – groans, moans and suchlike.

If any of the events above are triggered roll a D6 and if the roll matches the indicated chance then firing begins. If the artillery guns DO fire (it could be either side – it doesn’t matter which) take a three inch template and place it over the figure who triggered the shelling. Then roll 1D8 for scatter direction and 1D8 for scatter distance and place the template that many inches away from the target – the artillery is not especially accurate. Any figures under the template are hit by the shelling and take a hit from an 8 GUTS gun crew (already modified for terrain and night).

To further complicate matters there is something at work on the battlefield that neither side has anticipated. As shells crash home into the mud and ruin, churning up the mangled remains of other soldiers long dead, the dead may rise to strike back against those who disturb their rest. Each time an artillery shell hits home onto the tabletop roll a D6. On a roll of 1 immediately place D3 Phantoms under its template. The restless dead will move at full speed towards the nearest unit of either side and will attack until their target is dead or they themselves have been destroyed.

Blarnes has Guts of 11. Totally insane and convinced of his own charmed life, Blarnes does not fear harm from the Dwarven artillery at all (and is thoughtless enough to not consider his men) and may therefore only attack enemy models with his firearm. Because Blarnes is so convinced of his own inability to die at the hand of any other he may actually shrug off wounds that would fell another Orc through sheer disbelief that they may prove fatal: therefore he may re-roll any Guts check (his or opponents that targets him). He may only re-roll the check once but can do this multiple times per game.

Technically in charge of the operation, Fodder is seeing his first action since posted to the Mon-Gerahnt Line by his father, who thought it might ‘toughen the boy up’. He has no respect from the men and therefore does not count as an officer model. Fodder is in a terrible funk about the mission and is scared out of his wits to the extent that if a firearm is discharged within six inches of him he will let out a terrified shriek (see the artillery table above). Fodder has a Guts value of 8.

Roll 1D8 and add +4 for each of their starting Guts values.

All are armed with Orc Rifles.

Entwickler is one of the finest brains in Von Beerburgs Ausdenkerkorps and has kitted himself out in a number of inventions of his own devising for this crucial mission. In game terms most of them are utterly useless such as his gas-proof slinkboots, beard mounted reloading belt and his infamous helmet dwelling night vision frog, but under his uniform he is wearing a solid metal Brustgurt of his own invention that should stop any bullets fired his way, giving him a Guts modifier of +4 when being fired upon. Unfortunately for him the armour will repel bullets with a loud PTANG!-like noise (players may wish to imitate this) which may well draw the attention of the artillery fire. Entwickler has a Guts value of 10 and is armed with an SMG.

Kuckold is an unhappy dwarf: he has recently discovered that his beloved wife is little more than a shameless hussy who has been engaged in an affair with one of the troops under his command. He seeks to settle the score under cover of the night raid. The Orc player should randomly and secretly determine which of the privates (not Bombermann) has been dallying with Mrs. Kuckold at the start of the game and write it down. From the second turn onwards (Kuckold is biding his time) as soon as Kuckold moves within six inches of this model the Orc player should reveal his target (with a suitable flourish) and should make an immediate attack on him with his firearm. Kuckold must then continue to attack his target every turn until one or the other of them is killed, at which point he returns to normal control if still alive. Kuckold’s target (and his allies) may fire upon their own Korpral if they wish! Kuckold has a Guts value of 9. Kuckold is armed with a rifle.

Private Bombermann is Entwicklers secret weapon – he is loaded down with enough explosive to collapse an entire section of the Mon-Gerahnt Line and so spearhead the Dwarven advance. Because Bombermann is not the sharpest tool in the box he has been nominated to carry the explosive payload and been given simple instructions to detonate it. Due to its size and weight Bombermann may not throw the explosive but may detonate it wilfully before he reaches the trench should he so wish. If he does take the shelling template and apply it on top of Bombermann himself, but do not roll for damage on him as he is blown into tiny little bits automatically upon detonation. Note that this explosion counts towards the limit for raising the dead (see above) as well as having a high probability that it will bring down more shells upon the field of battle.

If Bombermann is killed there is a 50% chance that his payload will detonate anyway, with results described as above.

Bombermann has a Guts value of 8. He is not carrying any other weapon.

Roll 1D6 and add +4 for each of their starting Guts values. They are all armed with SMGs.

Should the dead rise use the rules for them found in Matthew Hartley’s scenario, Phantasy, right here on Orcs in the Webbe.

For either side to claim victory they must ensure at least one member of their forces reaches the opposition trench whilst at the same time ensuring no enemy forces reach their own.

If both sides reach their objective the battle may be considered a draw.

If both sides are wiped out (as a result of artillery shelling or the undead) then everybody has lost, just like in real war…

Finally this scenario leaves a number of questions unanswered. What caused the dead to be restless? What happens when (if) Blarnes reaches the Dwarven line and attempts to capture Von Beerburg? Will the Dwarves push through the Mon-Gerahnt Line? Can anything kill Blarnes? What does the night vision frog actually do?

I’ll leave the answers up to you.

For anyone not familiar with Panzerfäuste you can read an introductory article here, the free 'lite' version of the rules are available here on Wargames Vault.