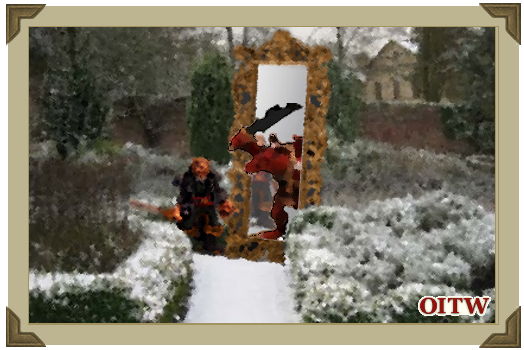 Sharke and his lads rush to the Notables Club, Mudfayre, to deal with a terrifying threat from another time...

The Scenario and Objectives

This is a scenario nominally for two players; though it can be played solo as well using the bolt on mechanics in your game book. The first player takes the part of Captain Sharke and the Rifleorcs while the second player takes the part of the Dracci. The Orcs must try and prevent the escape of a certain number of Dracci in the time allowed while the Dracci must kill a certain number of the Orcs.

I recommend you read "Sharke And The Mirror of Zyrgone" before playing this scenario as it will make more sense to you if you do.

Sharkes Lads (Grand Alliance)
Use the insert in 5109 Sharkes Chosen plus 5025 War in Catalucia to generate a section. The section contains Sharke, Harpy, Hagsmun, Arris, Tunge, Purrkinz, Koopa, Fredorcson and Septic Piecrust along with nine other Albion Orc rifles. All of these non-named characters are Light Infantry with Bakur Rifles and are Average rating with skills, traits and flaws assigned as per the rules. Use the profiles of the named characters as they appear in the insert.

You can download the insert for free from Alternative Armies directly here, look for the download link to dropbox.

The Dracci (Darke Age)
There is no set section for the Dracci in this scenario with the majority of their forces coming in after the first turn of the game. Using the OITW Dracci in Flintloque article ~#~ generate one Dracci Lord and three Dracci Warriors for the start of play. After this consult the random roll and generate the Dracci as rolled there.

You will need a standard playing area of six foot by four feet for this scenario along with terrain as outlined here. Lay out the playing area as per the instructions and add the forces as per the set up areas having your section rosters, dice and measuring tape and so forth ready to use. 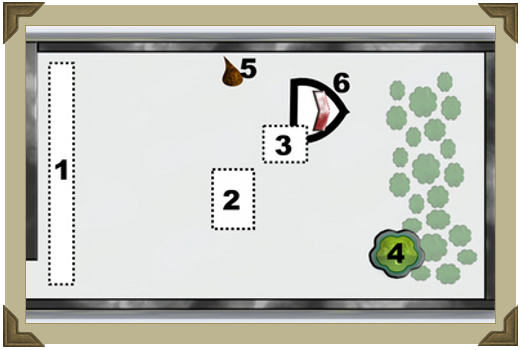 The playing area is the walled rear garden of the Notables Club in Londinium. The ground is flat and covered in a thin layer of snow which does not hinder movement. There are some trees to the rear along with the mirror platform (6), the discarded black velvet cloak (5) and the drain entrance to the undercity (4). The walls cannot be climbed or damaged.

This scenario has no limit in terms of length by number of elapsed turns. The game continues until the victory objectives of one side are met or play can no longer continue due to casualties on both sides. At the end of a turn in which a victory condition is met cease play and announce the winner of the scenario. Here are the objectives for both sides in the scenario:

Sharkes Lads
This is a fight that the Rifleorcs were not expecting against a vicious foe but they will give a good account of themselves none the less. Their objectives are to prevent ten Dracci of any type escaping down the drain and to kill at least one Dracci Lord.

The Dracci
Emerging from the Mirror of Zyrgone the children of the Dragons are intent on murder and conquest (as all Dracci are at all times!) but also on escape. Their objectives are to get ten or more of their number of any type down the drain and also to kill at least five enemy characters in cold blood.

This scenario has a few unique conditions and rules which you should read and make use of in play. Here we go!

The Mirror of Zyrgone: This magicke mirror is a portal to the Darke Age that Captain Flashorc has unwittingly set free in Albion's capital. Each turn (including the first) it will disgorge more Dracci. At the start of each turn roll 1D10 and add the result as follows: 1- A Dracci Lord with Sword or Spear, 2-3 Dracci Warrior with Sword, 4-5 Dracci Warrior with Spear, 6-7 Dracci Warrior with Thowing Weapons, 8-9 Two Dracci Warriors with free choice of Jade weapon each, 10 – Make two rolls (another roll of 10 in the same turn cancels the mirror for that turn, no more Dracci in the turn). Place each new Dracci in front of the mirror and in play. The mirror is eternal and may not be moved or damaged in any way.

The Drain: Its rusty iron grate torn away this drain is the perfect escape route for Dracci. It is large enough for one to enter at a time with takes one action. As long as this rule is obeyed any number of Dracci may enter per turn. The drain may not be blocked and once a character has dropped into it they may not return to the game.

The Robe: Only this velvet robe can block the magicke of the mirror and stop more Dracci appearing. It can be carried by one character but its needs their full attention meaning no melee or weapons fire or reloading while carrying the robe. The Dracci fear the robe and will not touch it (they will happily kill anyone carrying it though!). Any character who carries the robe to the mirror and spends one action in base to base contact may cover the mirror and cut off the flow of more dragon children. IF THE ORCS MANAGE THIS THEY WIN unless in the same turn enough Dracci escape the table or enough Orcs are killed.

The Dracci: Use the "Dracci in Flintloque" ~#~ article as mentioned for rules, statistics and so on. There are no Dracci Mages in this scenario. All other special rules such as those on Black Powder do apply.

This scenario can be played solo with the player taking either side in the action. It is recommended that the living player take the part of Sharke and his Rifleorcs. If this is the case then the Dracci are treated as Aggressive and will focus on sending 50% of their forces towards the Orcs in an effort to kill the nearest of them while the other half makes a dash for the drain. In the case of odd numbers they will elect to attack the Orcs.

If the human player wishes to be the Dracci then treat the Orcs as Defensive with the sole aim of getting a hold on the cloak and putting it over the mirror to gain victory.

These miniatures provide all the characters needed for playing the scenario and of course they can be almost endlessly re-used for other adventures. All the above miniatures and packs are available now from Alternative Armies webstore.

A year passes so rapidly in the life of a wargames designer and writer. It only seemed a month or so after when Craig Andrews had asked me for the 2011 Dracci tale (which became Owl Gristle and the Dragons ~#~ in the 2011 Advent) that he emailed his request for the 2012 Dracci tale and scenario. I will admit time was short, what with many projects on and the massive and I do mean massive demand for 15mm sci-fi miniatures this year, so I had only a few days to put something together for him and his readers.

Looking back over the stories of the Dracci there is much slaughter, there is much terror and there is a lot on the struggle between them and the Elves (see previous years!). But nothing featuring an urban environment and that most famous of Albion's sons; Reckhardt Sharke. There was a brand new and awesome boxed set of miniatures by Rob Alderman this year with Sharke in it and Craig loves Londinium so that was that.

I present these two articles about the Mirror of Zyrgone to you all. A portal on a vanished time, a jump off point for further adventures and of course some damn hard fighting in the proper Valonian form!

An Orcs in the Webbe Original! "Sharke's Mirror" was written exclusively for OITW's 2012 Advent Calendar and was first published on Wednesday 19th December 2012.

Once again Gavin has written a Dracci tale for the Advent Calendar specifically for me on my birthday and followed it up with a cracking scenario. I cannot thank Gavin enough for these tales!